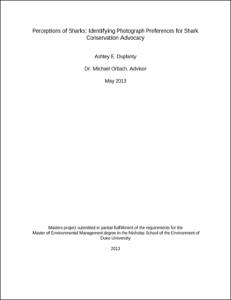 View / Download
2.9 Mb
Date
Author
Duplanty, Ashley E
Advisor
Orbach, Michael K
Repository Usage Stats
374
views
2,970
downloads
Abstract
American perceptions of sharks are changing. There has been a shift over several decades from the view of sharks as dangerous predators to animals in need of conservation. Simultaneously, shark conservation policies in the United States have developed. Advocacy organizations have been instrumental in educating and eliciting the interest of the American public about sharks and the need for conservation. Despite the shift in American perceptions of sharks, these animals still receive a lot of negative attention in the media. For this reason advocacy organizations need to select photographs of sharks to present to the American public with care. Using photographs from the nonprofit organization Shark Savers, I conducted interviews and surveys to examine the differences in preferences for photographs of sharks between Duke University Marine Lab students and the general public of Beaufort, North Carolina. The purpose of this study is to identify shark photograph preferences in order to inform advocacy groups for shark conservation campaigns. I investigated four categories of photographs: sharks with divers, photographs with multiple sharks, the location of the shark in the ocean, and dead sharks. The majority of the Duke University Marine Lab students did not have a preference for a diver in a photograph or had a preference for no diver. Most of the Beaufort participants did prefer to see a diver. The majority of the Marine Lab students and the Beaufort participants did not have a preference for the number of sharks in a photograph. Most participants in both sample groups had a preference for the location of shark: seeing a shark near the ocean floor. The majority of all participants stated it would be more effective for them to see a paring of live and dead sharks in an advocacy campaign, rather than only live sharks or only dead sharks.
Type
Master's project
Department
Nicholas School of the Environment and Earth Sciences
Subject
shark conservation
advocacy
American perceptions
photographs of sharks
photograph preferences
Permalink
https://hdl.handle.net/10161/6808
Citation
Duplanty, Ashley E (2013). Perceptions of Sharks: Identifying Photograph Preferences for Shark Conservation Advocacy. Master's project, Duke University. Retrieved from https://hdl.handle.net/10161/6808.
Collections
More Info
Show full item record