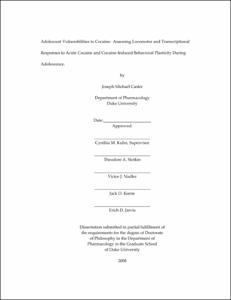 Adolescence is a critical period for drug addiction in humans. Most lifelong drug addiction is initiated during adolescence and the progression from initial drug use to the expression of addictive behaviors occurs more rapidly during adolescence than in adulthood. The purpose of this work was to examine if the adolescent brain uniquely responds to the addictive stimulant cocaine. This was accomplished by comparing the following measures in adolescent and adult male rats: locomotor responses to cocaine across a range of doses in two acute cocaine binge models, plasma cocaine and brain concentrations, locomotor responses to apomorphine, the relative magnitude of locomotor sensitization induced by a single high dose of cocaine (40 mg/kg), and cocaine-induced c-fos and zif268 expression. We determined that young adolescent (PN 28) rats had greater stereotypy responses to all doses of a repeated dose cocaine binge (15 mg/kg), the highest dose of an escalating dose binge (25 mg/kg), and low dose apomorphine. In addition to showing exaggerated acute locomotor responses to cocaine, young adolescents demonstrated a form of intrabinge sensitization that was absent in adults. Exaggerated adolescent locomotor responses could not be attributed to cocaine metabolism as we did not observe greater cocaine plasma or brain concentrations in adolescents compared to adults. A single high dose of cocaine (40 mg/kg) induced more ambulatory and stereotypy sensitization in young adolescents than adults. Further, the magnitude of the acute locomotor response to cocaine predicted the magnitude of locomotor sensitization in individual adolescents. We also showed that cocaine dose-dependently caused age-specific increases in the expression of the plasticity-associated immediate early genes c-fos and zif268: low dose (10 mg/kg) cocaine caused greater increases in striatal c-fos expression in adolescents whereas high dose (40 mg/kg) cocaine caused greater increases in striatal c-fos and zif268 expression in adults. Both doses of cocaine stimulated bigger increases in cortical zif268 expression in adults compared to adolescents. Finally, we demonstrated that the coordinated expression of striatal c-fos and zif268 develops during adolescence: there was no correlation between striatal c-fos and zif268 expression in individual adolescents but a strong correlation was seen in adults. The results of these experiments demonstrate that adolescents have unique molecular responses to acute cocaine and may help explain how adolescents show unique adaptive changes following continued cocaine use.