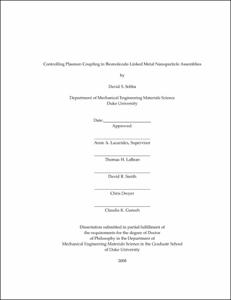 Molecular control of plasmon coupling is investigated in biomolecule-linked nanoparticle assemblies in two-particle, small cluster, and extended network formats. The relationship between structure and optical properties is explored through comparison of measured spectra with simulated spectra calculated using structural models based upon measured structural parameters. A variety of techniques are used to characterize nanoparticle assemblies, including ensemble extinction and elastic scattering spectroscopy, single-assembly scattering spectroscopy, transmission electron microscopy, and dynamic light scattering. Initially, molecular control of plasmon coupling is investigated in ~100 nm assemblies composed of 13 nm gold "satellite" particles tethered by duplex DNA to a 50 nm gold "core" particle. Comparison of core-satellite assemblies formed with duplex DNA tethers of varying length demonstrates that, while core-satellite separation is controlled by the number of base pairs in the DNA tether, structural properties such as core:satellite ratio and yield are independent of DNA tether length. Thus, plasmon coupling within these assemblies is determined by the number of base pairs in the duplex DNA tether; compact assemblies in which tethers are composed of fewer base pairs exhibit plasmon bands that are red-shifted relative to the bands of extended assemblies, indicating increased plasmon coupling in the compact assemblies. Subsequently, core-satellite assemblies are formed with reconfigurable DNA nanostructure tethers that modulate interparticle separation in response to a molecular stimulus. Assembly reconfiguration from a compact to an extended state results in blue-shifting of the assembly plasmon resonance, indicating reduced interparticle coupling and lengthening of the core-satellite tether. Comparison between measured and simulated spectra revealed a close correspondence and provided validation of the structural models that link assembly plasmonic properties with DNA control of interparticle separation.

Plasmon coupling is investigated also in binary metal systems. A new method for forming stable oligonucleotide-silver conjugates is presented, and controlled plasmon coupling is observed in reconfigurable core-satellite assemblies composed of 20 nm silver satellites linked to a 50 nm gold core by DNA tethers. Reconfiguration of the DNA linkers from a compact to an extended state results in decreased plasmon coupling and a blue-shift of the gold core plasmon resonance, similar to the response observed in analogous structures formed with gold satellites. Simulations of structures composed of gold and silver cores and satellites are performed to determine how the optical properties of binary metal assemblies may differ from those composed of a single metal. It appears that gold plasmons are systematically red shifted by silver particles, whereas plasmons supported by silver particles appear differentially sensitive to gold particles according to whether the silver particle is in a core position or a satellite shell. Next, the plasmonic properties of immobilized binary nanoparticle assemblies that incorporate a single strongly scattering component that acts as a template for assembly of weakly scattering plasmonic particles are investigated. Assemblies are composed of a streptavidin-coated gold "core" nanoparticle and BSA-biotin-coated gold or silver "satellite" particles. Through correlation of measured and simulated spectra, the dependence of assembly optical properties upon satellite coverage and satellite orientation about the core is addressed. It appears that plasmon coupling in gold core-gold satellite structures depends upon satellite orientation about the core and can manifest as either peak shifting or peak splitting, while the gold plasmon response to silver satellite assembly appears to be independent of satellite orientation. Finally, binary coupling is studied in one-dimensional particle pairs and three-dimensional extended networks composed of gold and silver particles linked by DNA. Investigation of particle pairs is performed by correlating assembly structure and optical properties. From both measured spectra, and simulated spectra based upon models that incorporate measured structural parameters, it appears that plasmon coupling within gold-silver particle pairs results in damping of the silver band and enhancement of the gold band. The optical response of plasmon coupling in extended networks composed of gold and silver particles is found to be qualitatively similar to coupling observed in unlike particle pairs. However, spectral simulations reveal that interactions between unlike components in binary gold and silver nanoparticle networks lead to modulation of coupling between like particle plasmons as well as pair-wise damping and enhancement.