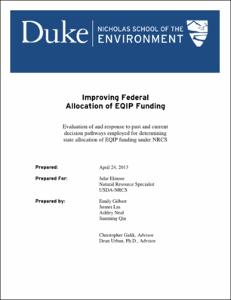 View / Download
919.6 Kb
Date
Authors
Gilbert, Emily
Liu, Jiemei
Neal, Ashley
Qin, Jianming
Advisors
Urban, Dean L.
Galik, Christopher
Repository Usage Stats
290
views
329
downloads
Abstract
The motivation behind this report is to evaluate and respond to past and current decision pathways employed for determining state allocation of the Environmental Quality Incentives Program [EQIP] funding under the Natural Resource Conservation Service [NRCS]. We work to provide justifiable recommendations for how the allocation of EQIP dollars might be improved, especially as it pertains to improving equity among those states with the highest priority needs. The distribution mechanism of federal EQIP funding to each state has received significant criticism in the past. The criticism stems primarily from the usage of a weighted factor formula that has been thought to unfairly favor certain states over others. Beyond questions of equity, there have also been more fundamental concerns over the quality of data inputted into the funding formula. In this project, we worked with our client, a Program Analyst at the North Carolina NRCS office, to tailor our recommendations to the specific concerns of one state. Our client’s specific concern was that North Carolina has historically been positioned lower in the national ranking of EQIP funding that it receives as compared to many other large agricultural states. To better understand the process of federal EQIP allocation, we reviewed the history of EQIP, examined the past and current decision pathways used to determine federal allocation of conservation dollars to state NRCS offices, conducted interviews among NRCS staff, and quantitatively analyzed the funding allocation process. We provide scenarios for how it might be possible for a state like North Carolina to increase the allocation of EQIP funding that it receives and attain better conservation on identified lands of highest priority. We expect that our recommendations targeted at helping EQIP improve equity among states in the federal funding allocation process, will ultimately lead to a rise in North Carolina’s allocation of EQIP funds and in its national ranking among other states. In this project, the formula we use to develop our quantitative analysis of the federal EQIP allocation process is the formula used by NRCS for fiscal years 2009-2011. The EQIP formula includes two parts: financial assistance and technical assistance. From our analysis, we developed a number of scenarios that propose ways in which the funding formula might be changed to better address different social or environmental issues and to serve those states that, in the past, have struggled to receive the same budgetary support as other states, and so are less likely to see the needs of their farmers and the conservation needs of their land be served to the same degree. Our evaluation led us to make a number of recommendations that we expect will move EQIP more in line with its stated goal of optimizing environmental benefits. Our recommendations are also made with the goal to reduce or eliminate many of the inconsistencies and criticisms that have beleaguered past EQIP funding allocation processes.
Type
Master's project
Department
Nicholas School of the Environment and Earth Sciences
Subject
Environmental Quality Incentives Program
conservation payments
funding decisions
North Carolina conservation
Natural Resource Conservation Service
Permalink
https://hdl.handle.net/10161/6824
Citation
Gilbert, Emily; Liu, Jiemei; Neal, Ashley; & Qin, Jianming (2013). Improving Federal Allocation of Environmental Quality Incentives Program Funding. Master's project, Duke University. Retrieved from https://hdl.handle.net/10161/6824.
Collections
More Info
Show full item record