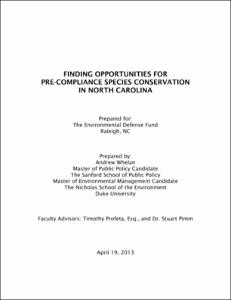 View / Download
4.9 Mb
Date
Author
Whelan, Andrew
Advisors
Profeta, Timothy H
Pimm, Stuart L.
Repository Usage Stats
414
views
329
downloads
Abstract
POLICY QUESTION: Which pre-compliance conservation strategies have the greatest potential to conserve multiple unprotected species in North Carolina? BACKGROUND: Pre-compliance conservation involves landowners working cooperatively with conservation managers to conserve imperiled yet unprotected species. The Environmental Defense Fund (EDF) wants to pursue pre-compliance measures in North Carolina. Unfortunately, species require different mitigation strategies on the basis of the threats they faced and their ecological characteristics. EDF is unclear which strategies could potentially conserve the greatest number of species. This project analyzes different conservation strategies on their ability to protect multiple species simultaneously in several geographic regions of North Carolina. It hopes to provide a tool to aid EDF in its ability to optimize preemptive species conservation. RECOMMENDED CONSERVATION STRATEGIES: EDF should consider the following criteria when deciding between pre-compliance strategies in each region: • Address the primary threats or stressors facing populations in the region • Align with the ecological characteristics of the species in the region • Align with the incentives, motivations, and opportunities of the region’s landowners Accounting for these criteria, I recommend that EDF implement the following strategies: 1) In the high-elevation western region of North Carolina, landowners should retrofit dams to naturalize stream flow conditions and allow for the passage of migratory species. The incentives for pre-compliance action may differ for private and public landowners. Private landowner participation might be incentivized by conservation easements or through protections from future regulatory action. Public landowners might be motivated by federal guidance promoting ecosystem services. I recommend focusing on this region first, due to its large number of unique species and potential for federal cooperation. 2) In the southeastern region of North Carolina, landowners should establish riparian buffers to limit siltation and runoff, reduce stream temperatures, and restore woody debris to aquatic ecosystems. Landowner participation might be incentivized by direct payments or through protections from future regulatory action. I recommend focusing on this region second, due to its large number of unique species. 3) In the agricultural eastern region of North Carolina, landowners should establish riparian buffers and improve irrigation technology; these strategies could be incentivized by direct payments or through protections from future regulatory action. Landowners should also adopt best management practices regarding fertilizer application, water use, and livestock management; these practices could be incentivized by conservation easements or the option to revert to previous management practices in the future. Reverse auctions could be used to identify participating landowners for all mitigation strategies in this region. I recommend focusing on this region third due to the abundant opportunities for landowner compensation provided by farm bill conservation programs. 4) In the developed central region of North Carolina, landowners should employ a combination of mitigation strategies. Potential strategies include riparian buffering, adopting best management practices, modifying development, retrofitting dams, stream shading, controlling erosion, removing invasive species, and conducting on-site stream restoration. I recommend prioritizing this region fourth; its large variety of threats might make it difficult to develop a comprehensive conservation plan. METHODS: 1. After identifying species that fit my criteria (wetland or aquatic animals in North Carolina that are imperiled yet unprotected), I grouped species populations into four geographic regions on the basis of spatial proximity, dominant land uses, and elevation. This was done to identify regions where a mitigation strategy might cover multiple species threatened by similar stressors. 2. I next conducted a spatial analysis of five stressors threatening target species populations: agriculture, development, deforestation, roads, and dams. For most stressors, threat levels were determined by the density of the threat within a 5 km radius; for dams, threat level was determined by the distance from the nearest upstream dam. 3. I conducted a literature review to identify common mitigation techniques for each threat class. 4. I analyzed programs that are commonly used to reach conservation agreements with landowners to identify policy alternatives, or tools. I then analyzed how the policy tools align with the previously identified mitigation techniques; this produced a list of mitigation techniques and policy tools that could be employed within each geographic region. 5. I then conducted a literature review on the ecological characteristics of the target species to ensure that the chosen mitigation techniques and policy tools aligned with the dominant species traits in each region. DISCUSSION: This project identified several opportunities for effective pre-compliance species conservation in North Carolina. While it tried to identify a “best option” for each geographic region, there are often multiple strategies with the potential for effective conservation. There are many resources that landowners and conservation managers can use to implement pre-compliance agreements. Section 319 of the Clean Water Act provides resources that allow farmers to reduce their NPS runoff (CWA 33 U.S.C. § 1329, EPA 2005). A variety of farm bill conservation programs provide technical assistance, financial compensation, and education to help farmers reduce their environmental impacts. This tool can potentially help EDF conserve many species by bypassing a long and contentious listing process under the federal Endangered Species Act.
Type
Master's project
Department
The Sanford School of Public Policy
Subject
pre-compliance
prelisting
preemptive
mitigation
conservation
policy
Permalink
https://hdl.handle.net/10161/6827
Citation
Whelan, Andrew (2013). Finding Opportunities for Pre-Compliance Species Conservation in North Carolina. Master's project, Duke University. Retrieved from https://hdl.handle.net/10161/6827.
Collections
More Info
Show full item record