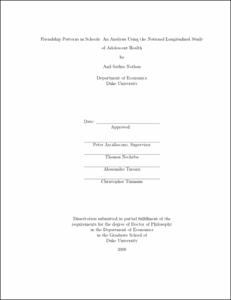 The rigorous economic analysis of peer group formation is a burgeoning subject. Much has been written about how peers influence an individual's behavior, and these effects are quite prevalent. However, less has been written on how exactly these peer groups begin and the resulting consequences of their formation. A reason for the dearth of knowledge on peer group formation is the lack of quality data sets that clearly define one's peers. To resolve this issue, the first chapter of this document explores data which allows a peer group to be defined openly through self nominations. Using these nominations as well as characteristics of the students and their friends, it is possible to see on what dimensions these individuals are sorting into friendships. The data suggests that there is heavy sorting within race and academic ability. Additionally, tests for statistical discrimination on race and academics show that it is exhibited towards blacks and Hispanics. There is also weak evidence of statistical discrimination against whites. Empirical analysis also shows that the degree of statistical discrimination decreases for blacks and Hispanics over a year; however, there is little change for whites over the same period. This result suggests a process of learning about a noisy signal on academic characteristics. Once a peer group is formed, however, the effects of the peer group become much more interesting. The second chapter of this document attempts to find an effect of having friends of a similar race and who are involved in similar activities. Using a strategy that corrects for the endogeneity of peer effects by instrumenting using variables at the ``grade within school'' level, it is shown that friendship diversity can help whites increase achievement. Although not much significance was found with other races, most of the strategies pushed towards the direction of racial diversity aiding achievement. Regarding extracurricular activities, it is found that there is a benefit in having friends in common individual academic activities, conditional on the respondent only belonging to academic or scholastic clubs. There are insignificant effects in having friends in common sports, conditional on the respondent only participating in sports. Potential future work for both chapters can include models describing the benefit of having various friends and the probability of forming those friendships, which can be used to simulate redistribution policies.