Fruit to Sapling: an Ontogenetically Integrated Study of Tree Recruitment in an Amazonian Rainforest 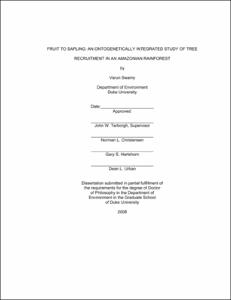 From analyzing a long-term seed rain dataset collected using a high-density array of seed traps, I confirmed that seed fall decreases sharply with increasing distance from fruiting trees, with disproportionately large contributions from a very small fraction of all trees. Patterns of seed fall, although idiosyncratic for individual species, tended to relate to dispersal syndrome. Intact seeds were found at significantly greater distances away from fruiting adults than ripe fruit and almost exclusively comprised the tail of the seed shadow for most species.

Saplings of all species examined recruited in areas of very low predicted seed density at significantly higher abundances than expected under a null hypothesis of "all seeds are equal". The value of a seed in terms of its potential to produce a sapling recruit - measured as sapling/seed ratio - initially increased greatly with increasing distance from reproductive conspecific adults and leveled off at farther distances, in almost all species.

A parallel experimental study employed >1000 individual seedlings of common tree species situated near and far from conspecific adults. Overall survival for all species pooled and for eight out of 11 individual species was significantly higher at sites located far from versus close to conspecific adults, with the study design controlling for seedling density at sites. Survival analysis based on multiple censuses revealed that a "distance effect" persisted and intensified over time, although the timing of onset of distance-related differential mortality differed amongst species. The role of host-specific invertebrate herbivores and microbial pathogens in causing seedling mortality near conspecific adults was confirmed by the use of mesh exclosures.

Overall, my results provide community-level support for the influence of distance-dependent processes on recruitment patterns. Seed dispersal appears critical for successful recruitment and undispersed seeds make a minimal contribution. When de-coupled from distance-dependence, effects of competition-based density-dependent processes on recruitment were weak or undetectable. I conclude that community-level tree recruitment processes and patterns in western Amazonian lowland rainforests that harbor intact floral and faunal assemblages conform closely to predictions of the Janzen-Connell hypothesis of tropical tree recruitment.