The Role of Gonadal Hormones in Mesencephalic Dopaminergic Systems 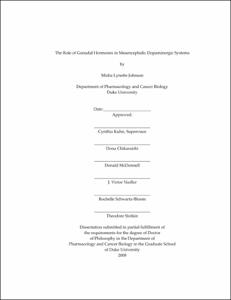 Dopamine regulates movement, cognition and the rewarding effects of addictive drugs. Sex differences mediated by gonadal hormones affect each of these processes. An extensive literature suggests that estrogen augments dopaminergic function. Our laboratory found that female rats exhibit increased locomotor stimulation in response to cocaine and greater cocaine-induced dopamine overflow compared to males, sex differences that emerge in early adulthood. Currently, the underlying mechanisms for these differences are poorly understood. I hypothesized that female rats would have more dopamine neurons in midbrain regions and that ovarian hormones would exert trophic effects on dopamine neurons. Immunohistochemical and stereological techniques were used to quantitate the number of cells in the SNpc and VTA of male and female rats and mice to assess: (1) if sex differences in dopamine neuron number exist and when they emerge, (2) how gonadal hormones influence dopaminergic cell number and dopamine-mediated behaviors (3) the role of specific hormone receptors in the effects on cell number (4) the possibility that dopamine neuron number is directly linked to cocaine-stimulated behavior and electrically-stimulated dopamine release and that these responses to cocaine are mediated through gonadal hormone modulation of midbrain dopamine neuron number. I discovered sex differences in midbrain dopamine neuron number; adult female rodents have more neurons in the SNpc and VTA. We also found that gonadectomy in adulthood reduced midbrain dopamine neuron number in females and increased neuron number in males, establishing the trophic effects of estrogen in the intact midbrain and possible suppressive effects of androgens. Treatment with agonists for estrogen receptor subtypes alpha and beta and androgen receptor reversed the effects of gonadectomy on cell number in females and males, respectively. In an effort to bridge cocaine-stimulated behavior and cell number in sham ovariectomized and ovariectomized females, we discovered cocaine-stimulated behavior, dopamine release and SNpc cell density were positively correlated in intact female rats, an effect that is lost with ovariectomy. This dissertation demonstrates that estrogen is critical for the maintenance of dopaminergic cell populations that enhance behavioral responses to psychostimulants in females, thereby contributing to the observed sex differences.