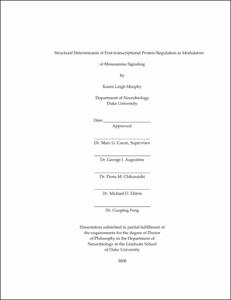 Monoamines were first discovered at the end of the 19th century when William Bates identified epinephrine (EPI) and noted its hemostatic effects. During the 20th century, norepinephrine (NE), dopamine (DA), and serotonin (5HT) were discovered in both the periphery and the brain. Due, in part, to the implication of monoamines in the etiology of a wide range of dysfunctions, the examination of their physiological functions became the subject of a considerable volume of research. Much progress has been made in describing the function and endogenous regulation of these systems, as well as their response to pharmacological intervention. However, many aspects of these systems remain unexplored. For example, though the role of pharmacological agents in regulating monoamine transporter function has been widely studied, relatively little is known about basal regulation in terms of protein processing and targeting. Similarly, the role of phosphorylation has been well characterized in the regulation of tyrosine hydroxylase (TH), but little is known about the regulation of the closely related tryptophan hydroxylases. The recent discovery of the second isoform of tryptophan hydroxylase (TPH2) has brought renewed interest to this field as the majority of this second isoform is centrally expressed and it contains an additional 41 amino acids at the N-terminus compared to TPH1, the peripheral enzyme. To increase the understanding of these aspects of monoamine signaling, this study characterizes the regulatory role played by the extended N-terminus of TPH2 using mutagenesis and cell culture systems and identifies determinants of monoamine transporter targeting and processing using the dopamine transporter (DAT) as a model. In chapter 2, we demonstrate that TPH2 is synthesized less efficiently and is also less stable than TPH1 when expressed in cultured cells. Furthermore, we identify a region centered upon amino acids 10-20 in TPH2 that appears responsible for the bulk of this difference. We also demonstrate here that phosphorylation of S19 in TPH2 results in increased TPH2 stability, and a consequent increase in 5HT production. Because this domain is unique to TPH2, these data provide evidence for selective regulation of brain 5HT synthesis. Based on measured uptake capacity and both visual and biochemical markers of protein localization, the results presented in chapter 3 suggest that a conserved YAAY motif in the C-tail of the monoamine transporters is essential for normal levels of membrane expression. We also demonstrate that disruption of this sequence interferes to some extent with the previously described hDAT/Hic-5 interaction. Together, the data presented here contribute to the understanding of the physiological regulation of brain monoaminergic signaling.