Carnivore Conservation: Evidence for the Effects of Habitat-Based Interventions 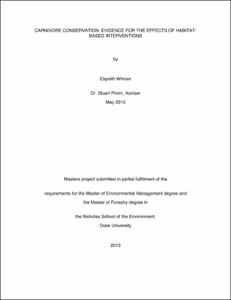 View / Download
1.6 Mb
Date
Author
Wilman, Elspeth
Advisor
Pimm, Stuart
Repository Usage Stats
243
views
357
downloads
Abstract
Terrestrial carnivores (Order Carnivora) are experiencing rapidly declining populations around the world. They face a myriad of threats, not least of which are threats to their habitat. Human population growth and development have destroyed, fragmented or degraded much of the land these charismatic species require to survive. Large carnivores in particular are affected by such threats due to their life history traits, such as low population density, solitary social structure and low fecundity. Many of these large mammalian carnivores are in urgent need of effective interventions to prevent their extinctions. However, the conservationists who are trying to save these species do not currently have access to an adequate evidence-base to inform their practices. Limited time, funds and experience in academic jargon can make it difficult for conservation practitioners to access and assess the scientific literature. This often forces conservationists to rely on common sense and expert opinion to choose strategies, making their decisions vulnerable to bias and lack of information. Conservation Evidence is a project started at Cambridge University to compile scientific evidence for conservation interventions into a concise and approachable package made freely available to the public. This study constitutes a portion of their upcoming synopsis of the evidence surrounding conservation strategies for terrestrial carnivores, focusing on habitat-based threats. While it is increasingly known that the conservation field requires a more evidence-based approach, this project shows there is a very limited amount of empirical evidence to support carnivore conservation efforts with respect to land use.
Type
Master's project
Department
Nicholas School of the Environment and Earth Sciences
Subject
Carnivores, Habitat Fragmentation, Evidence-Based Conservation
Permalink
https://hdl.handle.net/10161/6874
Citation
Wilman, Elspeth (2013). Carnivore Conservation: Evidence for the Effects of Habitat-Based Interventions. Master's project, Duke University. Retrieved from https://hdl.handle.net/10161/6874.
Collections
More Info
Show full item record