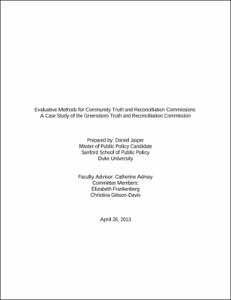 View / Download
897.2 Kb
Date
Author
Jasper, Daniel
Advisor
Admay, Catherine A.
Repository Usage Stats
597
views
525
downloads
Abstract
Truth and reconciliation commissions (TRC’s) are increasingly being used as a form of restorative justice at the national level. Arising out of post-conflict societies, TRCs saw a particularly significant increase from the late 1990’s onwards. TRCs may have real utility at the local level as well. Today community-based TRCs have been implemented in at least nine states in the U.S. The Greensboro Truth and Reconciliation Commission holds the distinguished honor of being the first of its kind in the country. What is not well understood, however, is the impact TRC’s have on the communities in which they serve. This study seeks to explore what evaluative methodology or combination of methodologies is best suited to capture a TRC’s impact, and what practices future TRC’s might employ to ensure evaluations are conducted in a systematic and sensitive manner. Understanding why evaluations of truth commissions are important may be obvious to some or something never considered by others. Regardless of one’s stance on evaluation, there are several reasons why evaluation should be considered among future truth commissions. Firstly, evaluations can help cement a community’s commitment to the truth and reconciliation process by continually confronting the public with assessments on the progress of their objectives. Secondly, evaluations allow donor agencies and non-governmental organizations to understand their contributions and give them an understanding of the lessons learned. Finally, at a broader level, public policy experts seek the best avenues to approach societal issues and, as truth commissions continue to make their way onto lists of alternatives to retributive justice mechanisms, understanding their impact is of critical importance to those who consider their use. Evaluations allow community expectations to be set at an appropriate level, and will allow policy makers to anticipate any gaps that may exist after a TRC has completed its work. Because every TRC seeks to address a different conflict, I examined this issue through the lens of one truth commission, the Greensboro Truth and Reconciliation Commission (GTRC), in order to orient the research in a specific context. In order to assess methodological strategies for evaluations of community-level TRC’s, I surveyed the existing literature on empirical research and transitional justice mechanisms, as well as, the literature surrounding the GTRC. I also conducted ten in-depth interviews with practitioners who were involved with the GTRC in order to gain first-hand insight into the best possible means by which to understand the impact of the GTRC. Interviewees consisted of three advisors, four commissioners, the GTRC Public Hearings Coordinator, the GTRC Executive Director, and the Vice Chair of the Commission Selection Panel. Through analysis of the interviews I conducted and supplementary material, I found that each methodology that I examined (quantitative, qualitative, and narrative) were applicable and desirable in the evaluations of truth commissions. Despite considerable controversy over some methodologies, in particular quantitative methods, each methodology was considered as an effective measurement of impact by a number of practitioners. In this regard, I find that there is nothing inherent in the truth commission process that excludes quantitative measurements from being an effective tool of analysis. However, I also found that overreliance on any one method could severely damage a truth commission’s assessment and that a quality evaluation of a truth commission must include elements of each methodology. The principle recommendation put forth in this paper is that community truth commissions should include an evaluative team in the structure of their commission. The imbedded evaluation team would allow researchers to witness discussions surrounding the objectives of the commission, which will help clarify what indicators can serve as a proper form of assessment. A common criticism of current evaluations is that researchers are measuring truth commissions against indicators that the commission did not seek to address. In this regard, an evaluative team that remained a separate division of the commission would allow the researchers to understand the process without compromising their independence.
Type
Master's project
Department
The Sanford School of Public Policy
Subject
Truth and reconciliation
Restorative justice
Truth commissions
Evaluation
Greensboro Truth and Reconciliation Commission
Truth and reconciliation commissions
Permalink
https://hdl.handle.net/10161/6892
Citation
Jasper, Daniel (2013). Evaluative Methods for Community Truth and Reconciliation Commissions: A Case Study of the Greensboro Truth and Reconciliation Commission. Master's project, Duke University. Retrieved from https://hdl.handle.net/10161/6892.
Collections
More Info
Show full item record