Functional parcellation of attentional control regions of the brain. 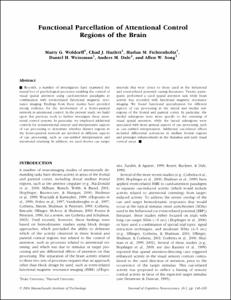 Professor in Radiology
The research in our lab is concerned with advancing structural and functional MRI methodologies (e.g. fast and high-resolution imaging techniques) for human brain imaging. We also aim to improve our understanding of functional brain signals, including spatiotemporal characterizations of the blood oxygenation level dependent contrast and alternative contrast mechanisms that are more directly linked to the neuronal activities. Additional effort is invested in applying and validating the de

Professor in Psychiatry and Behavioral Sciences
Dr. Woldorff's main research interest is in the cognitive neuroscience of attention. At each and every moment of our lives, we are bombarded by a welter of sensory information coming at us from a myriad of directions and through our various sensory modalities -- much more than we can fully process. We must continuously select and extract the most important information from this welter of sensory inputs. How the human brain accomplishes this is one of the core challenges of modern cognitive neuro
Alphabetical list of authors with Scholars@Duke profiles.