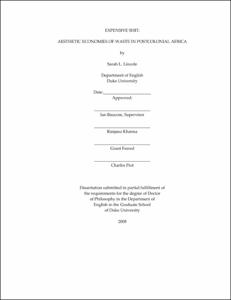 This dissertation proposes a reading of postcolonial African literature in light of the continent's continued status as a "remnant" of globalization--a waste product, trash heap, disposable raw material, and degraded offcut of the processes that have so greatly enriched, dignified and beautified their beneficiaries. The "excremental" vision of African authors, poets and filmmakers reflects their critical consciousness of the imbalances and injustices that characterize African societies and polities under pressure from monetized capitalism and domestic corruption. The figure of superfluity, excess, destruction or extravagance--concepts gathered together under the sign of "waste"--is a central thematic, symbolic, and formal feature of many postcolonial African works, and I suggest that literature functions in this context to document, critique, and offer alternatives to the culture of waste that predominates in political and social life on the continent.

The argument covers a range of geographical and historical ground, from the "excremental" preoccupations and stylistics of early postcolonial African fiction, to contemporary South Africa, where political anxieties about the relative superfluity of entire populations to the project of neoliberal development are articulated through the aesthetic challenges of representing the past while remaining open to productive futurity. Through chapters on excremental literature and the politics of allegory; corruption, debt and economy in Senegalese film; magical realism and inflation in Nigeria; and recycling and aesthetics in transitional South Africa, I argue for a reading of postcolonial African fiction as a mode of political ecology, an aesthetics that draws its energies directly from the problem of waste management figured in the works.

Drawing on theoretical perspectives from Walter Benjamin and postcolonial marxism to poststructuralist literary philosophy, the "new economic criticism," and psychoanalysis, I investigate how African artists themselves make sense of the continent's increasing superfluity to the global economy, its role only as "la poubelle"--the world's trash heap--where toxic waste and excess capital alike are sent to die.