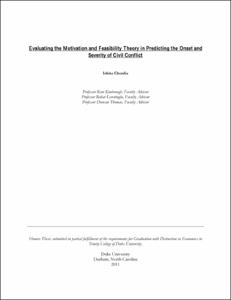 View / Download
897.2 Kb
Date
Author
Chordia, Ishita
Repository Usage Stats
254
views
217
downloads
Abstract
This paper looks at 187 countries from 1960-2004 and explores the economic indicators of the onset and the severity of civil conflicts, where civil conflicts are described as small clashes that result in 25 or more battle deaths per conflict. For conflict onset, I test a model that uses the Motivation Theory to predict when a conflict will begin while for conflict severity, I test a model that uses the Feasibility Theory to predict how severe a conflict will become. In the final section, I reverse the models and test the ability of the Motivation Theory to predict conflict severity and the ability of the Feasibility Theory to predict conflict onset. I find that the Motivation Theory performs better at predicting both conflict onset and severity.
Type
Honors thesis
Department
Economics
Subject
Conflict
International Security
Peace
Motivation
Feasibility
Permalink
https://hdl.handle.net/10161/6967
Citation
Chordia, Ishita (2013). Evaluating the Motivation and Feasibility Theory in Predicting the Onset and Severity of Civil Conflict. Honors thesis, Duke University. Retrieved from https://hdl.handle.net/10161/6967.
Collections
More Info
Show full item record