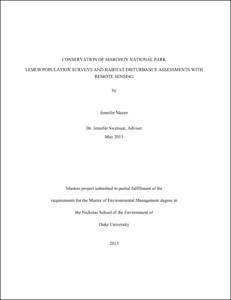 View / Download
39.4 Mb
Date
Author
Moore, Jennifer
Advisor
Swenson, Jennifer Jane
Repository Usage Stats
462
views
122
downloads
Abstract
Marojejy National Park is among the most biologically diverse protected areas in Madagascar. This unique mountainous park is home to eleven lemur species including the critically endangered silky sifaka (Propithecus candidus). However, due to lack of data and surveys for these species, there is a lack of knowledge as to the geographic range, elevation restrictions and density of each species. Additionally, habitat disturbances and forest conversion has not been characterized within the park and its surroundings. To begin to fill this gap, diurnal and nocturnal line-transect surveys were conducted across two regions within the park (north and central) in order to characterize lemur population abundance, habitat structure and disturbance; encounter rates and density were calculated for all species. To characterize regional disturbances, high resolution Geo-Eye and IKONOS GEO satellite imagery was processed to map land cover and human disturbances. From the field surveys I found a relatively higher density of strictly diurnal or primarily diurnal lemurs in the central region, and a higher density of nocturnal lemurs in the north region. These differences found could be a result of the transects surveyed in terms of elevation, amount of protection within the region of the park, frequency of foot traffic from tourist or guides, or differences in the number of predators or other species present. Anthropogenic disturbance was clearly higher in the north and included selective logging, old rosewood logs, lemur/carnivore traps, bush-huts, and extraction of wild tubers. These results highlight areas of the park requiring more protection, while providing some of the first lemur encounter rates and densities from this national park.
Type
Master's project
Department
Nicholas School of the Environment and Earth Sciences
Permalink
https://hdl.handle.net/10161/6980
Citation
Moore, Jennifer (2013). Conservation of Marojejy National Park: Lemur Population Surveys and Habitat Disturbance Assessments with Remote Sensing. Master's project, Duke University. Retrieved from https://hdl.handle.net/10161/6980.
Collections
More Info
Show full item record