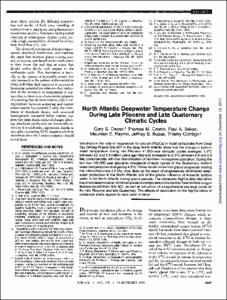 View / Download
1.4 Mb
Date
Authors
Dwyer, GS
Cronin, TM
Baker, PA
Raymo, ME
Buzas, JS
Corrège, T
Repository Usage Stats
251
views
350
downloads
Abstract
Variations in the ratio of magnesium to calcium (Mg/Ca) in fossil ostracodes from Deep Sea Drilling Project Site 607 in the deep North Atlantic show that the change in bottom water temperature during late Pliocene 41,000-year obliquity cycles averaged 1.5°C between 3.2 and 2.8 million years ago (Ma) and increased to 2.3°C between 2.8 and 2.3 Ma, coincidentally with the intensification of Northern Hemisphere glaciation. During the last two 100,000-year glacial-to-interglacial climatic cycles of the Quaternary, bottom water temperatures changed by 4.5°C. These results show that glacial deepwater cooling has intensified since 3.2 Ma, most likely as the result of progressively diminished deep-water production in the North Atlantic and of the greater influence of Antarctic bottom water in the North Atlantic during glacial periods. The ostracode Mg/Ca data also allow the direct determination of the temperature component of the benthic foraminiferal oxygen isotope record from Site 607, as well as derivation of a hypothetical sea-level curve for the late Pliocene and late Quaternary. The effects of dissolution on the Mg/Ca ratios of ostracode shells appear to have been minimal.
Type
Journal article
Permalink
https://hdl.handle.net/10161/6997
Collections
More Info
Show full item record Professor of Geochemistry
For the past several years, I have been pursuing the goal of understanding climate change on time-scales from decades to millions of years. I am particularly interested in what forces natural climate variability, how past climates have influenced the ecology and diversity of organisms in the tropics, as well as how climate change and other human activities will affect the eventual fate of these organisms. Sr. Research Scientist and Instructor in Earth and Ocean Sciences
Dwyer's experience lies in the development of tracers and indicators of environmental change, and their application to modern and ancient environmental systems. Research areas include paleoceanography, paleoclimatology, carbonate sedimentology, marine geology and environmental geochemistry.
Alphabetical list of authors with Scholars@Duke profiles.