Human Rights and the Sovereign State: An Examination of the Compatibility of State Sovereignty with the Humanitarian Necessities of a Global World 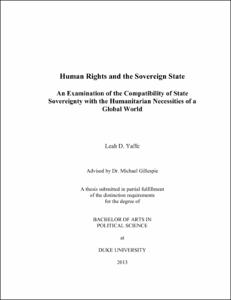 View / Download
508.4 Kb
Date
Author
Yaffe, Leah
Repository Usage Stats
523
views
2,133
downloads
Abstract
This thesis looks at the problem of sustaining human rights in a world of sovereign states. What does it mean for the global human rights movement that the predominant form of political organization in the world is the individual sovereign state? What are the tensions between the theories of sovereignty and humanitarianism? I trace the origin of the modern notion of sovereignty in order to demonstrate the difficulties posed for the human rights movement by state sovereignty. I argue that the relationship between the two concepts is antinomic: human rights require the resources and structure of the state for their actualization, yet are simultaneously put at risk by the unchecked power of the state. Because the human rights movement relies on state stability, but the stability of the state does not rely on the provision of human rights, an imbalance of power exists. Examining notions of sovereignty that antedate our own, I conclude that the human rights movement must become an international force strong enough to counterbalance powerful individual states in order to encourage states to adhere to human rights norms. This involves greater coordination between many elements of the human rights movement, including individuals, NGOs, regional organizations, multilateral institutions, and the international justice system.
Description
Honors thesis; Winner of the Elizabeth G. Verville Award
Type
Honors thesis
Department
Political Science
Subject
human rights
sovereignty
antinomy
humanitarianism
Permalink
https://hdl.handle.net/10161/7004
Citation
Yaffe, Leah (2013). Human Rights and the Sovereign State: An Examination of the Compatibility of State Sovereignty with the Humanitarian Necessities of a Global World. Honors thesis, Duke University. Retrieved from https://hdl.handle.net/10161/7004.
Collections
More Info
Show full item record