Sexual Reproduction and Signal Transduction in the Candida Species Complex 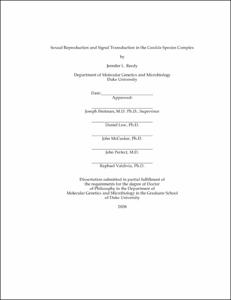 Although the majority of the population carries Candida spp as normal components of their microflora, these species are important human pathogens that have the ability to cause disease under conditions of immunosuppression or altered host defenses. The spectrum of disease caused by these species ranges from cutaneous infections of the skin, mouth, esophagus and vagina, to life-threatening systemic disease. Despite increases in drug resistance, the antifungal armamentarium has changed little over the past decade. Thus increasing our understanding of the life cycles of these organisms, not only how they propagate themselves, but also how genetic diversity is created within the population is of considerable import. Additionally expanding our knowledge of key signal transduction cascades that are important for cell survival and response to stress will add in developing new antifungal therapies and strategies.

This thesis addresses both of these key areas of fungal pathogenesis. In the first chapter, we use genome comparisons between parasexual, asexual, and sexual species of pathogenic Candida as a first approximation to answer the question of whether examining genome content alone can allow us to understand why species have a particular life cycle. We start by examining the structure of the mating type locus (MAT) of two sexual species C. lusitaniae and C. guilliermondii. Interestingly, both species are missing either one or two (respectively) canonical transcription factors suggesting that the control of sexual identity and meiosis in these organisms has been significantly rewired. Mutant analysis of the retained transcription factors is used to understand how sexual identity and sporulation are controlled in these strains. Secondly, based on the observation that these species are missing many key genes involved in mating and meiosis, we use meiotic mapping, SPO11 mutant analysis, and comparative genome hybridization to demonstrate that these species are indeed meiotic, but that the meiosis that occurs is occasional unfaithful generating aneuploid and diploid progeny.

In the second and third chapters we examine the calcineurin signaling pathway, which is crucial for mediated tolerance to cellular stresses including cations, azole antifungals, and passage through the host bloodstream. First, we show that clinical use of calcineurin inhibitors in combination with azole antifungals does not result in resistance to the combination, suggesting that if non-immunosuppressive analogs could be further developed this combinatorial strategy may have great clinical efficacy. Second, we use previous studies of the calcineurin signaling pathway in S. cerevisiae to direct a candidate gene approach for elucidating other components of this pathway in C. albicans. Specifically, we identify homologs of the RCN1, MID1, and CCH1 genes, and use a combination of phenotypic assays and heterologous expression studies to understand the roles of these proteins in C. albicans. Although the mutant strains share some phenotypic properties with calcineurin deletion strains, none completely recapitulate a calcineurin mutant.

In the last chapter, we examine the plausibility of targeting the homoserine dehyrogenase (Hom6) protein in C. albicans and C. glabrata as a novel antifungal strategy. Studies in S. cerevisiae had demonstrated a synthetic lethality between hom6 and fpr1, the gene encoding FKBP12 a prolyl-isomerase that is the binding target of the immunosuppressant FK506. Thiss synthetic lethality was due to the buildup of a toxic intermediate in the methionine and threonine biosynthetic pathway as a result of deletion of hom6 and inhibition of FKBP12. We deleted HOM6 from both C. albicans and the more highly drug-resistant species C. glabrata. Studies suggest that regulation of the threonine and methionine biosynthetic pathway in C. albicans has been rewired such that the synthetic lethality between hom6 and FKBP12 inhibition no longer exists. However, in C. glabrata preliminary analysis suggest that similarly to S. cerevisiae hom6 and inhibition of FKBP12 can result in cell death.