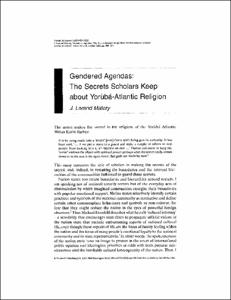 View / Download
1.7 Mb
Date
Author
Matory, JL
Repository Usage Stats
318
views
540
downloads
Abstract
Whereas scholars have often described the material interests served by any given social group's selective narration of history, this article catches scholars in the act of selectively narrating Yorùbá-Atlantic cultural history in the service of their own faraway activist projects. Anthropologist Ruth Landes' re-casting of the Afro-Brazilian Candomblá religion as an instance of primitive matriarchy not only encouraged feminists abroad but also led Brazilian nationalist power-brokers to marginalise the male, and often reputedly homosexual, priests who give the lie to Landes's interpretation. In the service of a longdistance Yorùbá nationalist agenda, sociologist Oyeronke Oyewumi has declared traditional Yorùbá society ‘genderless’, and found, among both North American feminist scholars and Yorùbá male scholars, allies in concealing the copious evidence of gender and gender inequality in Yorùbá cultural history. What these historical constructions lack in truth value they make up for in their power to mobilise new communities and alliances around the defence of a shared secret. The article addresses how politically tendentious scholarship on gender has inspired new social hierarchies and boundaries through the truths that some high-profile scholars have chosen to silence.
Type
Journal article
Permalink
https://hdl.handle.net/10161/7033
Published Version (Please cite this version)
10.1111/j.0953-5233.2003.00314.x
Publication Info
Matory, JL (2003). Gendered Agendas: The Secrets Scholars Keep about Yorùbá-Atlantic Religion. Gender & History, 15(3). pp. 409-439. 10.1111/j.0953-5233.2003.00314.x. Retrieved from https://hdl.handle.net/10161/7033.
This is constructed from limited available data and may be imprecise. To cite this article, please review & use the official citation provided by the journal.
Collections
More Info
Show full item record