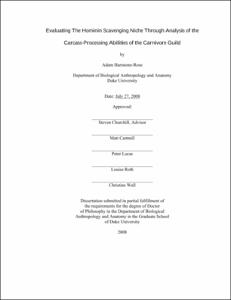 Humans are more carnivorous than other hominoids. It has been hypothesized that, during the evolution of this increased carnivory, hominins transitioned through a scavenging niche made viable by certain carnivoran taxa (especially sabertooths) that may have lacked the morphology necessary to fully utilize all parts of carcasses (e.g., marrow), therefore leaving an open niche in the form of high-quality scavengable remains available for hominins. In this dissertation, I examine the postcanine dentition of modern carnivorans, using quantifications of occlusal radii of curvature and intercuspid notches, and study the correlation of this morphology with carcass-processing behavior. I use these correlations to deduce the carcass-processing capabilities of the Plio-Pleistocene carnivores of South Africa (a guild for which we have a good appreciation of taxonomic diversity, and that existed at an important time during the evolution of our lineage - possibly the time that we transitioned into that guild), and compare these results with those of previous studies that relied on more conventional morphological measures.

Both radius of curvature and intercuspid notch data do a good job of separating taxa by dietary category, revealing subtle patterns including possible differences in the carcass-processing abilities of fossil and modern members of some extant species. Other strong trends confirm that the "hunting-hyena," Chasmaporthetes, was probably a hypercarnivore, and not a durophage like its modern confamilial taxa. Somewhat surprisingly, results do not support the hypothesis that sabertooth felids were more hypercarnivorous than modern felids. Furthermore, though the sympatric hypercarnivorous taxa were more numerous, so to were the durophageous taxa, with one taxon, Pachycrocuta, probably exceeding the durophageous capabilities of modern durophages.

As such, this dissertation shows no evidence that members of the paleo-carnivore guild were capable of producing higher quality scavengable carcasses than are modern carnivorans, and thus, based on these analyses of fossil carnivorans, it does not appear that high-quality scavengable remains were more available in the Plio-Pleistocene than there are today. Therefore, though there is clear evidence from other sources that hominins did scavenge at least occasionally, this dissertation does not support the hypothesis that there was an open niche consisting of high-quality scavengable remains.