Characterization and Modeling of Fluctuating Hypoxia in Breast Cancer 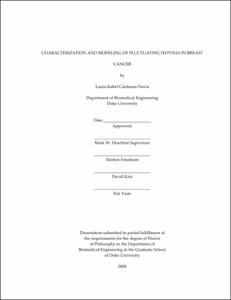 Tumor hypoxia is an enduring problem for traditional cancer therapies such as radiation and chemotherapy. This obstacle has traditionally been attributed to the widespread presence of chronic, diffusion-limited hypoxia in solid tumors; recent data suggests that tumor hypoxia may also be spatially and temporally variable. In this work we characterize the presence of spatial and temporal fluctuations in hypoxia, as well as use mathematical modeling to predict the impact of fluctuations on the hypoxic cytotoxin, tirapazamine, and examine potential mechanisms of fluctuations in tumor oxygenation. Using phosphorescence lifetime imaging on preclinical tumors, we show that instabilities in tumor oxygenation are a prevalent characteristic of three tumor lines and that previous characterization of tumor hypoxia as being primarily diffusion-limited does not accurately portray the tumor microenvironment. Then, using a one-dimensional theoretical model, we examine the effects of fluctuating hypoxia on metabolized tirapazamine concentration; we find that fluctuating oxygen reduces the concentration of metabolized tirapazamine at distances farther from the source, thereby limiting its ability to reach and kill the most hypoxic cells. Finally, we use a three-dimensional Green's function oxygen transport model to explore the effects of temporal fluctuations in hemoglobin saturation, blood flow, and overall perfusion on tumor tissue oxygenation. Results from the model predict that hemoglobin saturation has a dominant effect on tissue oxygenation. These studies collectively suggest that the pervasive temporal and spatial heterogeneity in tumor oxygenation are highly therapeutically relevant, and future clinical and preclinical studies are needed.