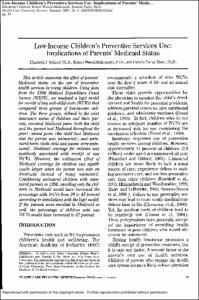 View / Download
2.4 Mb
Date
Authors
Gifford, E
Weech-Maldonado, Robert
Short, Pamela
Repository Usage Stats
214
views
134
downloads
Abstract
This article examines the effect of parents' Medicaid status on the use of preventive health services by young children. Using data from the 1996 Medical Expenditure Panel Survey (MEPS), we analyzed a logit model for receipt of any well-child visits (WCVs) that compared three groups of low-income children. The three groups, defined by the joint insurance status of children and their parents, involved Medicaid pairs (both the child and the parent had Medicaid throughout the year), mixed pairs (the child had Medicaid and the parent was uninsured), and uninsured pairs (both child and parent were uninsured). Medicaid coverage for children was positively associated with receipt of any WCVs. However, the utilization effect of Medicaid coverage for children was significantly larger when the parent was also on Medicaid instead of being uninsured. Considering uninsured children with uninsured parents in 1996, enrolling only the children in Medicaid would have increased the percentage with WCVs from 29 to 43 percent according to simulations with the logit model. If the parents were enrolled in Medicaid as well, the percentage of children with any WCVs would have increased to 67 percent.
Type
Journal article
Permalink
https://hdl.handle.net/10161/7069
Collections
More Info
Show full item record