Misrecognized: Looking at Images of Black Suffering and Death 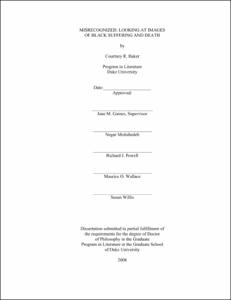 This dissertation investigates the social, emotional, and ethical implications of looking at the suffering and death of African Americans. Drawing on film theory, visual studies, literary criticism, and semiotics, the study addresses events and images from 1834 to 2000 in which the humanity of the black body was called into question. The events discussed include: a nineteenth-century riot over the abuse of slaves; the mass media depiction of Hurricane Katrina survivors; the National Association for the Advancement of Colored People's 1935 antilynching art exhibition; James Allen's 2000 exhibition of lynching photography; the Emmett Till case; and the Spike Lee-directed film Bamboozled (2000). The project ultimately argues for a nuanced appreciation of looking relations that takes into account the ethics of the look, especially when that look is directed toward bodies that cannot speak for and in defense of themselves.