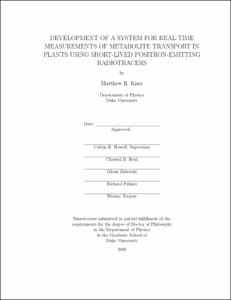 Over the past 200 years, the Earth's atmospheric carbon dioxide (CO2) concentration has increased by more than 35%, and climate experts predict that CO2 levels may double by the end of this century. Understanding the mechanisms of resource management in plants is fundamental for predicting how plants will respond to the increase in atmospheric CO2. Plant productivity sustains life on Earth and is a principal component of the planet's system that regulates atmospheric CO2 concentration. As such, one of the central goals of plant science is to understand the regulatory mechanisms of plant growth in a changing environment. Short-lived positron-emitting radiotracer techniques provide time-dependent data that are critical for developing models of metabolite transport and resource distribution in plants and their microenvironments. To better understand the effects of environmental changes on resource transport and allocation in plants, we have developed a system for real-time measurements of metabolite transport in plants using short-lived positron-emitting radiotracers. This thesis project includes the design, construction, and demonstration of the capabilities of this system for performing real-time measurements of metabolite transport in plants.

The short-lived radiotracer system described in this dissertation takes advantage of the combined capabilities and close proximity of two research facilities at Duke University: the Triangle Universities Nuclear Laboratory (TUNL) and the Duke University Phytotron, which are separated by approximately 100 meters. The short-lived positron-emitting radioisotopes are generated using the 10-MV tandem Van de Graaff accelerator located in the main TUNL building, which provides the capability of producing short-lived positron-emitting isotopes such as carbon-11 (11C; 20 minute half-life), nitrogen-13 (13N; 10 minute half-life), fluorine-18 (18F; 110 minute half-life), and oxygen-15 (15O; 2 minute half-life). The radioisotopes may be introduced to plants as biologically active molecules such as 11CO2, 13NO3-, 18F--[H2O], and H2<sup>15<\sup>O. Plants for these studies are grown in controlled-environment chambers at the Phytotron. The chambers offer an array of control for temperature, humidity, atmospheric CO2 concentration, and light intensity. Additionally, the Phytotron houses one large reach-in growth chamber that is dedicated to this project for radioisotope labeling measurements.

There are several important properties of short-lived positron-emitting radiotracers that make them well suited for use in investigating metabolite transport in plants. First, because the molecular mass of a radioisotope-tagged compound is only minutely different from the corresponding stable compound, radiotracer substances should be metabolized and transported in plants the same as their non-radioactive counterparts. Second, because the relatively high energy gamma rays emitted from electron-positron annihilation are attenuated very little by plant tissue, the real-time distribution of a radiotracer can be measured in vivo in plants. Finally, the short radioactive half-lives of these isotopes allow for repeat measurements on the same plant in a short period of time. For example, in studies of short-term environmental changes on plant metabolite dynamics, a single plant can be labeled multiple times to measure its responses to different environmental conditions. Also, different short-lived radiotracers can be applied to the same plant over a short period of time to investigate the transport and allocation of various metabolites.

This newly developed system provides the capabilities for production of 11CO2 at TUNL, transfer of the 11CO2 gas from the target area at TUNL to a radiation-shielded cryogenic trap at the Phytotron, labeling of photoassimilates with 11C, and in vivo gamma-ray detection for real-time measurements of the radiotracer distribution in small plants. The experimental techniques and instrumentation that enabled the quantitative biological studies reported in this thesis were developed through a series of experiments made at TUNL and the Phytotron. Collimated single detectors and coincidence counting techniques were used to monitor the radiotracer distribution on a coarse spatial scale. Additionally, a prototype Versatile Imager for Positron Emitting Radiotracers (VIPER) was built to provide the capability of measuring radiotracer distributions in plants with high spatial resolution (~2.5 mm). This device enables detailed quantification of real-time metabolite dynamics on fine spatial scales.

The full capabilities of this radiotracer system were utilized in an investigation of the effects of elevated atmospheric CO2 concentration and root nutrient availability on the transport and allocation of recently fixed carbon, including that released from the roots via exudation or respiration, in two grass species. The 11CO2 gas was introduced to a leaf on the plants grown at either ambient or elevated atmospheric CO2. Two sequential measurements were performed per day on each plant: a control nutrient solution labeling immediately followed by labeling with a 10-fold increase or decrease in nutrient concentration. The real-time distribution of 11C-labeled photoassimilate was measured in vivo throughout the plant and root environment. This measurement resulted in the first observation of a rapid plant response to short-term changes in nutrient availability via correlated changes in the photoassimilate allocation to root exudates. Our data indicated that root exudation was consistently enhanced at lower nutrient concentrations. Also, we found that elevated atmospheric CO2 increased the velocity of photoassimilate transport throughout the plant, enhanced root exudation in an annual crop grass, and reduced root exudation in a perennial native grass.