Aspects of the Feeding Ecology of the Antillean Manatee (<italic>Trichechus manatus manatus</italic>) in the Wetlands of Tabasco, Mexico 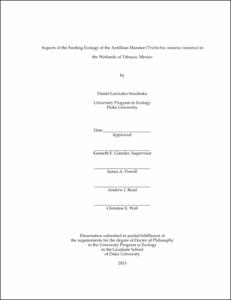 Manatees (Mammalia: Sirenia), along with the closely related dugongs, are the only herbivorous marine mammals. Manatees consume a wide variety of vascular plants and algae in both marine and freshwater habitats. However, little is known about what characteristics influence diet and food selectivity, especially in freshwater habitats, which represent a large portion of the available habitat for the endangered Antillean manatee, <italic>Trichechus manatus manatus</italic>, in Central and South America. Understanding foraging ecology is an important element of effective conservation strategies.

This dissertation investigated various aspects of the foraging ecology of the Antillean manatee in a freshwater habitat, specifically: 1) how plant availability (i.e. species richness, diversity, and abundance) varied seasonally with changes in water depths, 2) manatee food selectivity from a representative set of plant species from that freshwater habitat, and 3) the relationship of plant nutritive compounds and availability with manatee food selectivity. In addition, this dissertation describes the multiple uses of sonar technology for studying manatees and habitat characteristics in freshwater.

selected 27 (11+ genera) of the 54 species examined during the feeding experiments. Of the plant characteristics tested (i.e. nutritive components and plant availability), only digestible fiber (HC) was significantly related to manatee food selection, with manatees

selecting plants with higher HC content. Four unique applications were identified for the use of side-scan sonar to facilitate manatee research in freshwater habitats: 1) confirmation of visual sightings and determination of group size, 2) determination of mother-calf pairs, 3) habitat characterization, and 4) assisting manatee captures.

Results from this study reveal that manatees living in the freshwater wetlands of Tabasco, Mexico have to cope with a highly seasonal availability of plants and that while manatees consume plants from a wide variety of genera, they are highly selective. Unlike other herbivorous mammals, manatee food selectivity was not influenced by CP, NDF, or ADF, but rather by digestible fiber. A unique suit of anatomical and physiological characteristics suggests that manatees may be fiber digestion specialists. Both seasonal plant availability and the manatee's large dietary breadth must be considered when developing 1) conservation strategies for wild manatees in freshwater habitats and 2) protocols for captive rehabilitation of orphaned and stranded manatees that will be reintroduced into the wild.