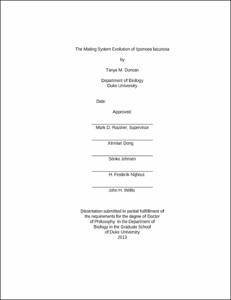 The evolution of selfing from outcrossing is one of the most frequent mating system transitions in angiosperms. Plants that are highly selfing typically exhibit a suite of morphological traits termed a "selfing syndrome," including reduced corollas and reproductive structures, loss of corolla pigmentation, little anther-stigma separation, and a low pollen/ovule ratio. The overall consensus among scientist is that the morphological changes that accompany the transition to selfing are adaptive and thus a product of natural selection. Few attempts, however, have been made to determine whether traits of the selfing syndrome are truly an operation of natural selection or if genetic drift could be the acting force. My dissertation examines the roles that natural selection and genetic drift played in the evolution of the selfing syndrome in Ipomoea lacunosa. With the use of field observations, crossing data, and molecular analyses, I show that I. lacunosa has evolved increased selfing ability, decreased anther-stigma distance and smaller, white flowers, compared to its closest relative I. cordatotriloba. Furthermore, using a standard QST - FST comparison, I evaluated the relative importance of selection and drift in the evolution of the selfing syndrome in I. lacunosa. I also identified the genetic basis of flower color divergence between I. lacunosa (white) and I. cordatotriloba (purple) and examined patterns of variation to determine if selection or genetic drift caused the divergence. Analyses revealed that the traits of I. lacunosa characteristic of the selfing syndrome have evolved as a product of natural selection, not genetic drift.