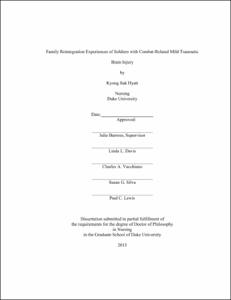 More than 300,000 soldiers have returned from Southwest Asia (i.e., Iraq and Afghanistan) with combat-related mild traumatic brain injuries (mTBIs) associated with exposure to improvised explosive devices (IEDs). Despite less visible physical injuries, these soldiers demonstrate varying levels of physical and cognitive symptoms that impact their post-mTBI family reintegration. The existing literature acknowledges post-mTBI changes in the injured individual affect family functioning; however, post-injury family functioning, such as coping and adaptation, has not been explored. The intent of this dissertation is to explore the problems and challenges of military family reintegration following mTBI.

Nine soldiers with mTBI and their spouses participated for a total of 27 interviews. Both joint and separate individual interviews were conducted to explore their post-mTBI family reintegration experiences. Participants included active duty soldiers with mTBI who were between 2 and 24 months post-deployment and their civilian spouses. Strauss and Corbin's grounded theory methodology was used to collect and analyze the data. This dissertation study consists of three papers, each of which explored experiences that surround family reintegration following mTBI.

families after mTBI. The second paper explores the family reintegration processes of post-mTBI soldiers and their spouses. The majority of participants interviewed, both soldiers and their spouses, indicated that symptoms such as irritability, memory loss, and cognitive deficit affected their family reintegration. Some participants reported they had accepted the changes and were working toward a new normal, whereas others indicated these changes were unacceptable and continued their efforts to resume pre-injury functioning.

The third paper examined the experiences of soldiers and their spouses about seeking treatment for mTBI-related symptoms. The majority of interviewed soldiers and their spouses indicated that a delayed diagnosis, difficulty accessing mental health care, and having to navigate an unfamiliar military healthcare system were their biggest challenges. Post-mTBI soldiers experienced significant disruption due to mismatched expectations among themselves and other family members concerning their post-injury capabilities. More research is needed in order to develop effective post-injury rehabilitation programs for soldiers with mTBI and their families.