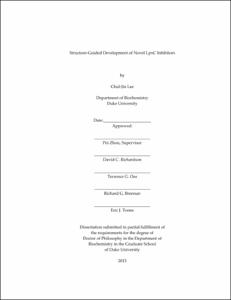 In Chapter I, I survey the medically significant Gram-negative pathogens, the molecular basis of different resistance mechanisms and highlight the benefits of novel antibiotics targeting LpxC. In Chapter II, I discuss a structure-based strategy to optimize lead compounds for LpxC inhibition, revealing diacetylene-based compounds that potently inhibit a wide range of LpxC enzymes. The elastic diacetylene scaffold of the inhibitors overcomes the resistance mechanism caused by sequence and conformational heterogeneity in the LpxC substrate-binding passage that is largely defined by Insert II of LpxC. In Chapter III, I describe the structural basis of inhibitor specificity of first-generation LpxC inhibitors, including L-161,240 and BB-78485 and show that bulky moieties of early inhibitors create potential clashes with the &#61538;a-&#61538;b loop of Insert I of non-susceptible LpxC species such as P. aeruginosa LpxC, while these moieties are tolerated by E. coli LpxC containing long and flexible Insert I regions. These studies reveal large, inherent conformational variation of distinct LpxC enzymes, providing a molecular explanation for the limited efficacy of existing compounds and a rationale to exploit more flexible scaffolds for further optimization of LpxC-targeting antibiotics to treat a wide range of Gram-negative infections.

In Chapters IV and V, a fragment-based screening and structure-guided ligand optimization approach is presented, which has resulted in the discovery of a difluoro biphenyl diacetylene hydroxamate compound LPC-058 with superior activity in antibacterial spectrum and potency over all existing LpxC inhibitors. In Chapter VI, I describe our efforts to improve the cellular efficacy of LPC-058 by reducing its interaction with plasma proteins, such as human serum albumin (HSA). The binding mode of LPC-058 was captured in the crystal structure of HSA/LPC-058 complex. The acquired structural information facilitated the development of the dimethyl amine substituted compound LPC-088 that displays significantly improved cellular potency in presence of HSA.