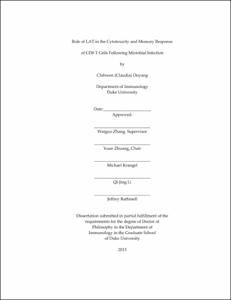 Linker for activation of T cells (LAT) is a transmembrane adaptor protein that is crucial in linking TCR engagement to downstream signaling events, such as calcium flux and Ras-MAPK pathway. Following TCR engagement, LAT is phosphorylated at its membrane-distal tyrosine residues, which mediates the binding of Grb2/Sos, PLC-&#61543;1, and GADS/SLP-76 complexes. This multi-protein signaling complex initiates signaling cascades eventually leading to the activation of transcription factors that regulate the genes required for T cell proliferation and effector functions. The indispensable role of LAT in thymocyte development has been evidenced as LAT-deficient mice completely lack peripheral T cells. To study the function of LAT in mature T cells, our lab previously generated a conditional knock-in mouse line in which the lat gene can be deleted by Cre recombinase. Deletion of LAT in mature T cells revealed the critical role of LAT in T cell activation. Here, we used this inducible LAT deletion mouse line crossed with the OT-I transgenic mice to study the role of LAT in mature CD8 T cells.

To analyze the contribution of LAT in CD8 T cells during the course of pathogen infection, we infected mice with Listeria monocytogenes-expressing Ova to elicit activation of antigen-specific CD8 T cells, and then inducibly deleted LAT in these cells at different stages of infection under the control of tamoxifen treatment. We show that LAT is important for maintaining CD8 T cell expansion during the priming phase; however, it is not required for CD8 T cell contraction. In addition, memory CD8 T cell can persist in the absence of LAT, suggesting that LAT-signaling is not necessary for memory maintenance. Nonetheless, these LAT-deficient memory T cells were unable to proliferate or produce cytokines upon secondary infection. Moreover, LAT deficiency accelerates memory differentiation during the effector-to-memory transition, leading to a higher frequency of KLRG1lowIL-7RhighCD62Lhigh memory T cells. Together, these data demonstrate that, while it is dispensable for contraction and memory maintenance, LAT-signaling regulates CD8 T cell memory differentiation and is essential for the memory response against pathogens.

The fundamental activity of CD8 T cells is to elicit cytotoxicity toward target cells that express foreign antigens, and this is mediated through granule-dependent and Fas ligand-dependent mechanisms. The signaling events that regulate these processes remain unclear. We showed that LAT-deficient cytotoxic T cells (CTLs) failed to upregulate FasL and produce IFN-&#61543; after engagement with target cells. Moreover, they displayed reduced granule-mediated killing. We further dissected the effect of the LAT deletion on each step of granule exocytosis. LAT-deficiency led to altered synapse formation, subsequently causing unstable T cell:APC conjugates. MTOC polarization and granule reorientation were also impaired by LAT-deficiency, leading to reduced granule delivery. Despite these defects, granule release was still observed in LAT-deficient CTLs due to residual calcium flux and PLC activity. This revealed an unexpected finding that CTL function is not entirely dependent on LAT. Collectively, these data indicate that the signaling circuits governing CTLs are programmed to adopt multiple pathways, allowing CTLs to effectively eliminate various pathogens during adaptive immune responses.