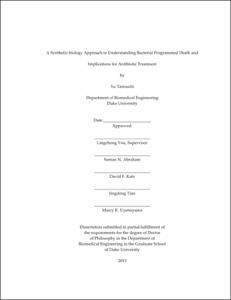 Programmed death is often associated with a bacterial stress response. This behavior appears paradoxical, as it offers no benefit to the individual. This paradox can be explained if the death is `altruistic': the sacrifice of some cells can benefit the survivors through release of `public goods'. However, the conditions where bacterial programmed death becomes advantageous have not been unambiguously demonstrated experimentally. Here, I determined such conditions by engineering tunable, stress-induced altruistic death in the bacterium Escherichia coli. Using a mathematical model, we predicted the existence of an optimal programmed death rate that maximizes population growth under stress. I further predicted that altruistic death could generate the `Eagle effect', a counter-intuitive phenomenon where bacteria appear to grow better when treated with higher antibiotic concentrations. In support of these modeling insights, I experimentally demonstrated both the optimality in programmed death rate and the Eagle effect using our engineered system. These findings fill a critical conceptual gap in the analysis of the evolution of bacterial programmed death, and have implications for a design of antibiotic treatment.