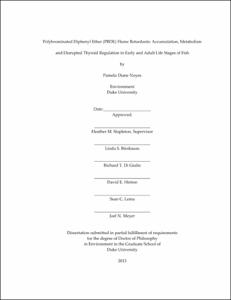 Polybrominated diphenyl ethers (PBDEs) are a class of brominated flame retardant chemicals that are added to plastics, electronic components, furniture foam, and textiles to reduce their combustibility. Of the three commercial mixtures historically marketed, only DecaBDE, which is constituted almost entirely (~97%) of the fully brominated congener decabromodiphenyl ether (BDE-209), continues to be used in the U.S. today. While decaBDE is scheduled for phase-out in the U.S. at the end of 2013, exposures to BDE-209 and other PBDEs will continue into the foreseeable future as products that contain them continue to be used, recycled, and discarded. In addition, decaBDE use continues to be largely unrestricted across Asia, although restricted from use in electronic equipment in Europe.

Despite limits placed on PBDE uses, they are ubiquitous contaminants detected worldwide in humans and wildlife. Major health effect concerns for PBDEs come largely from evidence in laboratory rodents demonstrating neurotoxicity, reproductive and developmental impairments, and thyroid disruption. The potential for PBDEs, particularly BDE-209, to disrupt thyroid regulation and elicit other toxic outcomes in fish is less clear. Thus, the overall objective of this thesis research was to answer questions concerning how fish, as important indicators of overall environmental health, are metabolizing PBDEs and whether and how PBDEs are disrupting thyroid hormone regulation. The central hypothesis was that PBDE metabolism in fish is mediated by iodothyronine deiodinase (dio) enzymes, which are responsible for activating and inactivating thyroid hormones, and that PBDE exposures are causing thyroid system dysfunction across fish life stages.

Under the first research aim, in vitro experiments conducted in liver tissues isolated from common carp (Cyprinus carpio) suggested a role for dio enzymes in catalyzing the reductive debromination of PBDEs. Carp liver microsomes efficiently debrominated BDE-99 to BDE-47, and enzymes catalyzing this reaction were associated predominantly with the endoplasmic reticulum (i.e., microsomal fraction) where dio enzymes are located. Competitive substrate experiments in carp liver microsomes also demonstrated that rates of BDE-99 debromination to BDE-47 were significantly inhibited upon challenges with 3,3',5'-triiodothyronine (rT3) and thyroxine (T4). This finding supported the hypothesis that enzymes involved in the metabolism of PBDEs may have high affinities for thyroid hormones. Indeed, experiments to determine apparent enzymatic kinetics (apparent Vmax and Km values) of BDE-99 hepatic metabolism suggested that enzymes responsible for the catalytic activity appeared to have a higher affinity for native thyroid hormone than BDE-99.

The second and third research aims were focused on evaluating BDE-209 accumulation, metabolism, and thyroid toxicity in juvenile and adult life stages of fish using the fathead minnow (Pimephales promelas) as a model. BDE-209 bioaccumulated and was debrominated to several reductive metabolites ranging from penta- to octaBDEs in both juvenile and adult fish exposed to BDE-209. In addition, thyroid hormone regulation in juvenile and adult male fathead minnows was severely disrupted by BDE-209 at low, environmentally relevant exposures. In juvenile minnows, the activity of dio enzymes (T4-outer ring deiodination; T4-ORD and T4-inner ring deiodination; T4-IRD) declined by ~74% upon oral doses of 9.8 ± 0.2 µg/g wet weight (ww) food at 3% body weight (bw)/day for 28 days, compared to controls. Declines in dio activity were accompanied by thyroid follicle hypertrophy indicative of over-stimulation and injury. In addition to thyroid disruption, a distinctive liver phenotype characterized by vacuolated hepatocyte nuclei was measured in ~48% of hepatocytes from treated fish that was not observed in controls.

Under the third research aim, adult male fathead minnows received dietary treatments of BDE-209 at a low dose (95.3 ± 0.41 ng/g-food at 3% bw/day) and a high dose (10.1 ± 0.10 µg/g-food at 3% bw/day) for 28 days followed by a 14-day depuration period to evaluate recovery. Compared to negative controls, adult male fish exposed orally to BDE-209 at the low dose tested for 28 days experienced a 53% and 46% decline in circulating total T4 and T3, respectively, while fish at the high BDE-209 dose tested had total T4 and T3 deficits of 59% and 62%, respectively. Depressed levels of plasma thyroid hormones were accompanied by a 45-50% decline in the rate of T4-ORD in brains of all treatments by day 14 of the exposure. The decreased T4-ORD continued in the brain at day 28 with a ~65% decline measured at both BDE-209 doses. BDE-209 exposures also caused transient, tissue-specific upregulations of relative mRNA transcripts encoding dio enzymes (dio1, dio2), thyroid hormone receptors (TR&alpha, TR&beta), and thyroid hormone transporters (MCT8, OATP1c1) in the brain and liver in patterns that varied with time and dose, possibly as a compensatory response to hypothyroidism. In addition, thyroid perturbations at the low dose tested generally were equal to those measured at the high dose tested, suggesting non-linear relationships between PBDE exposures and thyroid dysfunction in adult fish. Thus, mechanisms for BDE-209 induced disruption of thyroid regulation can be proposed in adult male minnows that involve altered patterns of thyroid hormone signaling at several important steps in their transport and activation.

A growing body of evidence describing PBDE toxicity in biota, including data generated here, along with studies showing continued and rising PBDE body burdens, raises concern for human and wildlife health. Long delays in removing PBDEs from the market, their ongoing presence in many products still in use, and their active use outside the U.S. and European Union will leave a lasting legacy of rising contamination unless more concerted regulatory and policy actions are taken to reduce future exposures and harm.