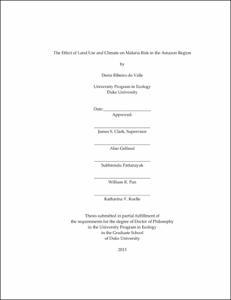 The goal of this thesis is to study the relationship between climate and land use / land cover (LULC) on malaria risk in the Amazon region. Despite the large public policy implications, current literature provides contradictory evidence regarding how LULC affects malaria risk. Furthermore, little is known regarding the public health impacts of the predicted drying of the Amazon. In this thesis, we rely on mosquito and malaria incidence/prevalence data from multiple sources, both from the Brazilian and Peruvian Amazon, and we develop novel methodology to integrate multiple datasets and infer malaria risk factors.

The first chapter describes a novel method to combine data from different Plasmodium detection methods (i.e., polymerase chain reaction (PCR) and microscopy) and sampling schemes (i.e., aggressive active case detection and passive case detection). Using this method and detailed data on malaria prevalence, we find that proximity to forest, as well as participation on forest activities, greatly enhance malaria risk. Furthermore, our results suggest that asymptomatic Plasmodium carriers are more likely to be individuals that have recently arrived in the region and that live in regions with high forest cover.

The second chapter describes large scale patterns regarding LULC, climate, and malaria incidence. To this end, we rely on a unique dataset collected by the Brazilian government surveillance system over ~4 years, spanning ~4.5 million km2 and 1,300,000 malaria cases. This analysis indicates that malaria incidence is substantially higher in areas with higher forest cover, whereas deforestation rate (the often cited culprit of malaria in the region) is not significantly associated with malaria. We also find that a drier climate may enhance malaria risk in the Brazilian Amazon region. We then employ a statistical model and a LULC simulation model to predict that malaria risk may be substantially higher in a governance (GOV) scenario versus a business-as-usual (BAU) scenario, a direct consequence of the averted deforestation under the GOV scenario.

In the third chapter, we discuss how current methodology to characterize mosquito breeding habitat may be improved when the goal is to guide larva control interventions and identify areas with higher disease risk. To accomplish these goals, we contend that it is critical for researchers to understand the spatial and temporal distribution of water bodies. We use simulations and Anopheles darlingi larva data to illustrate how inference might be misleading when the distribution of water bodies is ignored.

Finally, the fourth chapter re-examines results from a key study conducted in the Peruvian Amazon, which has been the basis for the widespread notion that malaria risk increases in deforested areas. Differently from the original studies, I integrate mosquito larva and mosquito biting rate from multiple vector species with malaria prevalence data, to determine how LULC and climate affect malaria risk. I find that A. darlingi larva presence and biting rate indeed increase in deforested areas, agreeing with the original published results. However, we find that malaria prevalence is not associated with A. darlingi biting rate whereas it tends to be positively associated with A. rangeli biting rate. We hypothesize that there is a mismatch between location and time of the day at which individuals are more exposed to infections and our predictions of mosquito biting rate, which are based on household locations and a 18 - 24:00 period. If this hypothesis is correct, any association between malaria prevalence and the mosquito biting rate is likely to be spurious. Although our analysis is not conclusive because of limitations in the malaria prevalence dataset, our results suggest that inference on malaria risk based solely on a single vector species might be misleading. In particular, the relationship between deforestation and malaria risk will critically depend on how exposure changes as a function of human behavior and on the competence of the different vector species.

Throughout this thesis, a major thrust has been to employ statistical models carefully tailored to the problems at hand, with the overarching goal of generating more reliable inference. To this end, I have created parsimonious models (e.g., using multiple shrinkage priors or using a reversible jump algorithm) which properly accommodate data idiosyncrasies (e.g., zero inflation and over-dispersion) and use, when possible, data from multiple sources.