Bone Morphogenetic Proteins Signal through Smad1/5/8 to induce MET, Smad2 to Specify the Dorsoventral Axis and Smad3 to Facilitate Invasion. 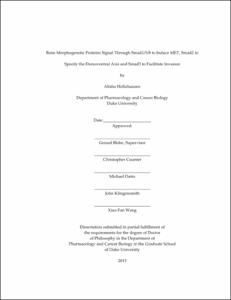 The bone morphogenetic protein (BMP) signaling pathways have important roles in embryonic development and homeostasis. BMPs have been shown to pattern the dorsoventral axis in zebrafish (<italic>Danio rerio</italic>) early during embryonic development by establishing a dorsal-to-­ventral ligand gradient. During tumorigenesis, BMPs primarily function as tumor promoters, as an increase in BMP expression is associated with an increase in invasion, migration, epithelial-­to-­mesenchymal transition (EMT), proliferation and angiogenesis.

Although it is clear that BMPs play multiple roles in these biological events, the precise mechanism by which BMPs mediate these functions is not fully understood. Canonically, BMP ligands signal through cell surface receptor complexes that phosphorylate transcription factors, Smad1, Smad5 and Smad8, which mediate BMP-­ specific gene transcription. While studying BMP signaling during cancer progression, we determined that BMPs unexpectedly signal through the canonical TGF-&beta;-­responsive transcription factors, Smad2 and Smad3.

Taken together, our data provides evidence that BMP-­induced Smad2 and Smad3 phosphorylation occurs through a non-­canonical signaling mechanism to mediate multiple biological events. Thus, the signaling mechanisms utilized by BMPs and TGF-­&beta; superfamily receptors are broader than previously appreciated.