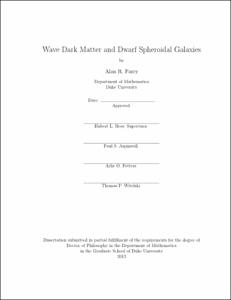 In the introductory Chapter 1, we present some preliminary background material to define and motivate the study of wave dark matter and describe some of the properties of dwarf spheroidal galaxies.

In Chapter 3, we explore spherically symmetric solutions to the Einstein-Klein-Gordon equations, the defining equations of wave dark matter, where the scalar field is of the form f(t,r) = exp(i omega t) F(r) for some constant omega in R and complex-valued function F(r). We show that the corresponding metric is static if and only if F(r) = h(r)exp(i a) for some constant a in R and real-valued function h(r). We describe the behavior of the resulting solutions, which are called spherically symmetric static states of wave dark matter. We also describe how, in the low field limit, the parameters defining these static states are related and show that these relationships imply important properties of the static states.

In Chapter 4, we compare the wave dark matter model to observations to obtain a working value of Upsilon. Specifically, we compare the mass profiles of spherically symmetric static states of wave dark matter to the Burkert mass profiles that have been shown by Salucci et al. to predict well the velocity dispersion profiles of the eight classical dwarf spheroidal galaxies. We show that a reasonable working value for the fundamental constant in the wave dark matter model is Upsilon = 50 yr^(-1). We also show that under precise assumptions the value of Upsilon can be bounded above by 1000 yr^(-1).

In order to study non-static solutions of the spherically symmetric Einstein-Klein-Gordon equations, we need to be able to evolve these equations through time numerically. Chapter 5 is concerned with presenting the numerical scheme we will use to solve the spherically symmetric Einstein-Klein-Gordon equations in our future work. We will discuss how to appropriately implement the boundary conditions into the scheme as well as some artificial dissipation. We will also discuss the accuracy and stability of the scheme. Finally, we will present some examples that show the scheme in action.

In Chapter 6, we summarize our results. Finally, Appendix A contains a derivation of the Einstein-Klein-Gordon equations from its corresponding action.