Hedgehog Signaling in Anterior Development of the Mammalian Embryo 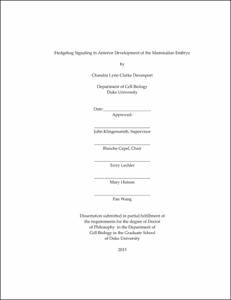 Sonic hedgehog (Shh) is a critical secreted signaling molecule that regulates many aspects of organogenesis. In the absence of Shh, many organs, including the foregut, larynx, palate, cerebellum and heart do not form properly. However, the cellular details of the roles of Shh, including the relevant domains of Shh expression and reception, have not been elucidated for many of these processes.

The single embryonic foregut tube must divide into the trachea and esophagus, which does not occur in the Shh-null mutant. In Chapter 5, I use Cre-Lox technology to determine that the ventral foregut endoderm is the relevant source of Shh for this process and the mesoderm must directly receive that Shh signal. Surprisingly, this signaling event appears to occur two days before the foregut begins to divide, indicating an early essential role for Shh in foregut division.

Shh is also expressed at later stages in the maturing trachea and esophagus. In Chapter 6, I demonstrate that these domains serve to establish differentiated mesoderm. In the trachea, Shh from the endoderm signals directly to the mesoderm to form the tracheal cartilage rings. In the esophagus, the roles of Shh are more complex. Shh regulates the size of the esophagus and controls patterning of the concentric rings of esophageal mesoderm, however this process seems to be indirect, requiring autocrine Shh signaling within the esophageal endoderm.

The laryngeal apparatus is entirely absent in the Shh-null mouse. I n Chapter 3, I dissect the domains of Shh expression and reception required for laryngeal development and demonstrate that loss of endodermal Shh expression causes laryngotracheoesophageal clefts and malformed laryngeal cartilages. As much of laryngeal morphogenesis poorly understood, I also utilize dual mesodermal and neural crest fate maps to determine the embryonic origins of various laryngeal tissues. Finally, as Shh signaling often occurs in concert with Bone Morphogenic Protein (BMP) signaling, I investigate the roles of BMP signaling in laryngeal development.

Much of Shh signaling occurs at the primary cilium, to which Smoothened, a critical pathway member, must translocate upon Shh signal transduction. This process requires a Smo-Kif3a-&#946;arretin complex in mammalian cell culture. However, the roles of &#946;arrestins in mouse development, and their relationship to Shh signaling have not been investigated in vivo. To do so, in Chapter 4, I analyze the phenotypes of the &#946;arr1/&#946;arr2 double knockout embryos and demonstrate that they have palatal, cerebellar, cardiovascular and renal defects consistent with a specific impairment of mitogenic Shh signaling.

Altogether, my work dissects the cellular details of Shh signaling during multiple organ systems in the mouse embryo. I further analyze the consequences of absent or misregulated Shh signaling across multiple developmental contexts and determine that Shh plays critical and diverse roles in organogenesis.