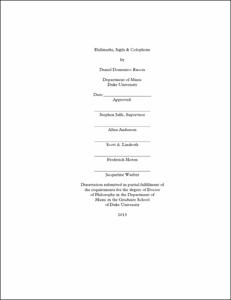 This dissertation contains two related documents: a piece of music entitled <italic>Hallmarks, Sigils & Colophons</italic> for three female singers and chamber orchestra setting excerpts from Christian Bök's <italic>Eunoia</italic>; and an article entitled "Reorganizing the Rock and Roll: U.S. Maple's Musical Deconstructions." These two chapters are linked by an engagement with the phonic materiality of speech and the polyvalent implications that arise from the intense musical study of that materiality.

Chapter 1, <italic>Hallmarks, Sigils & Colophons</italic>, is a six-movement work for soprano, mezzo-soprano, alto, and chamber ensemble. Each movement sets excerpts from the individual chapters of Christian Bök's <italic>Eunoia</italic>, a collection of prose poems inspired by the avant-garde literary group Oulipo. As such, each chapter only uses single vowels: "Chapter A" uses only words with the letter a, "Chapter E" uses only e, and so on. The piece explores the sound worlds of each individual vowel, attempting to create unified musical ideas from each vowel's unique sonic character. I am particularly interested in the ways in which the limited range of vowel sounds changes the affect of a sonic space. I occasionally attempt to mimic (or at least reference) Bök's use of constraints, though I never allow constraint to override musical concerns. Despite using words, this piece tells no unified story, and each movement exists, on some levels, as self-contained wholes.

Chapter 2, "Reorganizing the Rock and Roll: U.S. Maple's Musical Deconstructions," discusses the relationship between the music of the rock group U.S. Maple and Derrida's theories of deconstruction. U.S. Maple's music is often described by critics and fans as "deconstructing" rock music, though the band dismisses the term for its pejorative implications. In this article, I argue that the band's music could, in fact, be read as expanding the Derridean concepts of <italic>différance</italic> and the "trace" into the realm of music. I describe how US Maple performs what Marcel Cobussen terms "deconstruction in music" to the case of conventional hard rock tropes. I focus particularly on the way in which singer Al Johnson creates a language out of paralinguistic utterances--singing in yelps, growls, grunts, groans, and garbled words--and thereby cultivates the multiplicity of sounds and significations that are typically relegated to subordinate status by other rock singers. I also use Richard Middleton's ideas about repetition in pop music to analyze how the band deconstructs the syntax of rock by imbuing their songs with the affect of improvisation.