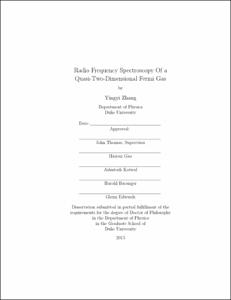 This dissertation presents the first experiments on radio frequency (rf) spectroscopy of a quasi-two dimensional strongly interacting ultracold atomic Fermi gas. A 50-50 mixture of spin-up and spin-down atoms is confined in a series of pancake-shaped traps produced using an optical standing-wave. To make the system quasi-two dimensional, I adjust the Fermi energy in the weakly confined direction to be comparable to the harmonic oscillator energy level spacing in the tightly confined direction.

For a perfectly two dimensional system, at low enough temperature, spin-up and spin-down atoms should form dimers in the ground state of the tightly confined direction. However, in our quasi-two dimensional system I find that the simple dimer theory does not agree with the measured radio-frequency spectra. Instead, the data can be explained by polaron to polaron transitions, which is a many-body effect. Here, a polaron is a spin-down impurity surrounded by a cloud of particle-hole pairs in a spin-up Fermi sea. With this unique strongly interacting quasi-two dimensional system, I am able to study the interplay between confinement induced two-body pairing and many-body physics in confined mesoscopic systems of several hundred atoms, which has not been previously explored and offers new challenges for predictions.