The Evolution of Genre and Narrative in Mahler's Vocal-Orchestral Works, from Das klagende Lied to the Eighth Symphony 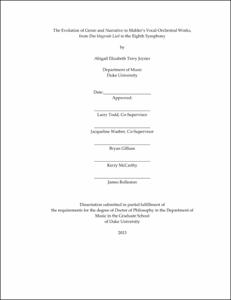 Narrative symphonic music dominated much of Mahler's compositional output during his early career. His early symphonic cantata,<italic>Das klagende Lied</italic> (1880-1901), and the <italic>Wunderhorn</italic> Symphonies (Nos. 2-4, 1888-1901) incorporated instruments and voices in non-operatic settings, and relied in various ways on narrative elements to tell a story. And as a highly visible opera conductor, Mahler was of course familiar with narrative strategies in the context of the opera house. That said, Mahler's approach to narrative in his own symphonic music evolved over the course of his career. This dissertation explores that evolution by examining <italic>Das klagende Lied</italic> and the Eighth Symphony (1906) in terms of narrative and formal structure, and the broad significance they held for Mahler's compositional trajectory from 1880 to 1906.

I propose that the original, tripartite version of <italic>Das klagende Lied,</italic> divided into <italic>Waldmärchen,</italic> <italic>Spielmann,</italic> and <italic>Hochzeitsstück,</italic> betrays its origins in the genre of the Romantic symphonic cantata, typified in the German repertoire by a <italic>Märchen</italic> storyline and defining narrative goal. Using concepts of linear narratives to examine Mahler's poetry and music, I consider the cantata in terms of its narrative purpose, character, and formal structure. In the original version of <italic>Das klagende Lied,</italic> Mahler employed the technique of genderless, omniscient narration to present the storyline. By deleting <italic>Waldmärchen,</italic> in 1893, Mahler disrupted the narrative flow, leaving a bipartite composition that was less linear and one that offered an alternative to the generic structures of Romantic symphonic narratives that he had inherited as a composer. In addition to <italic>Waldmärchen's</italic> elimination, Mahler reconceived his use of omniscient narration by diffusing the narrative voice among various vocal parts.

As Mahler continued to revise <italic>Das klagende Lied,</italic> his career as a conductor flourished. He wrote the <italic>Wunderhorn</italic> Symphonies while making dramatic changes to <italic>Das klagende Lied.</italic> In his concerts, he programmed concert overtures, opera arias, and song cycles, but rarely did he program other 19th-century symphonic cantatas. In these years, he moved away from conventional genre, demonstrated in the vocal-orchestral efforts of the Second, Third, and Fourth Symphonies.

Narrative themes of mortality and a child's vision of heaven pervade the texts of the <italic>Wunderhorn</italic> Symphonies, while in the meantime Mahler struggled with his own views of spirituality, society, and politics in <italic>fin-de-si&egraveecle</italic> Europe. By its creation in 1906, the Eighth Symphony presents from the outset a starkly different narrative approach than <italic>Das klagende Lied</italic> and the <italic>Wunderhorn</italic> symphonies. Maurus' hymn <italic>Veni, creator spiritus</italic> positions the listener immediately in the heavenly realm, then, with Goethe's final scene from <italic>Faust II,</italic> the music plummets vertiginously to earth, focusing intimately on Faust's soul and its steady ascent back to heaven. The Eighth Symphony then becomes a journey narrative: how the soul itself returns to the ecclesiastical realm of <italic>Veni, creator spiritus.</italic> Faust travels up a high mountain, greeted along the way by saints, anchorites, angels, and Una poenitentium, who was formerly Gretchen, Faust's discarded mistress. Along with themes of vertical ascent and redemption, Mahler explores the eternal feminine in the Eighth Symphony, creating a complex view of sociopolitical spirituality that placed the female in the role of Redeemer.

This study not only explores the linear narrative structure of <italic>Das klagende Lied</italic> but also examines how Mahler modified conventional narrative throughout the creation of the <italic>Wunderhorn</italic> symphonies and finally constructed a vertical narrative - from heaven to earth and back again - in the Eighth Symphony.