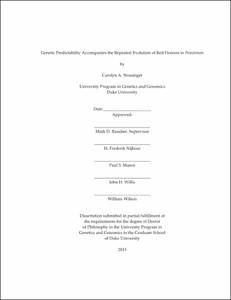 Examining the genetic basis across repeated origins of the same phenotypic adaptation allows us to address several questions pertaining to the genetic basis of adaptation. First, whether the genes and types of mutations that are involved in adaptation are predictable. Second, whether the underlying genetic changes can constrain future evolutionary trajectories. Here, I have focused on the genetics of blue to red flower color shifts, an adaptive shift that has repeatedly occurred across angiosperms. First, I review the literature and determine the relative contribution of functional vs. regulatory mutations to the evolution of red flowers can be predicted both on the mutational target size of each type of mutation and the degree of their associated deleterious pleiotropy. Chapter 2 characterizes the genetic basis of red flowers in Penstemon barbatus using a combination of gene expression and protein function assays. I demonstrated that multiple inactivating mutations to one anthocyanin pathway enzyme, F3'5'h, have occurred, but no mutations to any other component of the anthocyanin pathway have contributed to the evolution of red flowers. This suggests that F3'5'h may be a particularly favorable target for selection and also that evolutionary reversal to blue flowers would be highly unlikely. Chapter 3 investigates the genetic basis of an additional 12 origins of red flowers within Penstemon. Again, using a combination of gene expression and enzyme function assays, I found the genetic basis of these additional origins red flowers in Penstemon is highly predictable, involving redundant inactivating mutations to F3'5'h, and tissue-specific regulatory mutations to a second gene F3'h. Thus, the genetics of red flowers in Penstemon often involves inactivation of a non-pleiotropic gene, F3'5'h, but tissue-specific regulatory mutations to the pleiotropic gene F3'h. Furthermore, the presence of redundant inactivating mutations in many red-flowered Penstemon species indicates that the evolutionary reversal to blue flowers would be unlikely.