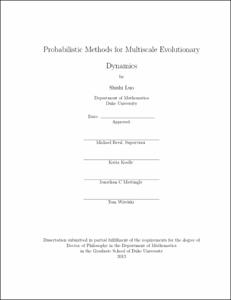 Evolution by natural selection can occur at multiple biological scales. This is particularly the case for host-pathogen systems, where selection occurs both within each infected host as well as through transmission between hosts. Despite there being established mathematical models for understanding evolution at a single biological scale, fewer tractable models exist for multiscale evolutionary dynamics. Here I present mathematical approaches using tools from probability and stochastic processes as well as dynamical systems to handle multiscale evolutionary systems. The first problem I address concerns the antigenic evolution of influenza. Using a combination of ordinary differential equations and inhomogeneous Poisson processes, I study how immune selection pressures at the within-host level impact population-level evolutionary dynamics. The second problem involves the more general question of evolutionary dynamics when selection occurs antagonistically at two biological scales. In addition to host-pathogen systems, such situations arise naturally in the evolution of traits such as the production of a public good and the use of a common resource. I introduce a model for this general phenomenon that is intuitively visualized as a a stochastic ball-and-urn system and can be used to systematically obtain general properties of antagonistic multiscale evolution. Lastly, this ball-and-urn framework is in itself an interesting mathematical object which can studied as either a measure-valued process or an interacting particle system. In this mathematical context, I show that under different scalings, the measure-valued process can have either a propagation of chaos or Fleming-Viot limit.