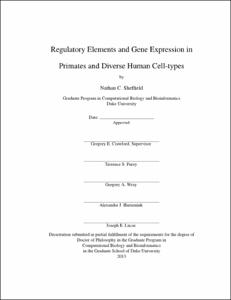 After finishing a human genome reference sequence in 2002, the genomics community has

turned to the task of interpreting it. A primary focus is to identify and characterize not only

protein-coding genes, but all functional elements in the genome. The effort has identified

millions of regulatory elements across species and in hundreds of human cell-types. Nearly

all identified regulatory elements are found in non-coding DNA, hypothesizing a function

in diverse areas of biology.

between humans and other primates. These phenotypic differences are partially driven

by mutations in non-coding regulatory DNA that alter gene expression. This hypothesis

has been supported by differential gene expression analyses in general, but we have not

yet identified specific regulatory variants responsible for differences in transcription and

phenotype. I have worked to identify regulatory differences in the same cell-type isolated

from human, chimpanzee, and macaque. Most regulatory elements were conserved among

all three species, as expected based on their central role in regulating transcription. How-

ever, several hundred regulatory elements were gained or lost on the lineages leading to

modern human and chimpanzee. Species-specific regulatory elements are enriched near

latory DNA are linked with species-specific changes in chromatin accessibility. Together,

these indicate that species-specific regulatory elements contribute to transcriptional and

gene expression distinctly across cell-types. In a study of 112 human cell-types, I classified

regulatory elements into clusters based on regulatory signal tissue specificity. I then used

these to uncover distinct associations between regulatory elements and promoters, CpG-

genes for more than 500k regulatory elements. Finally, I introduced a web resource to

is modulated within and across human cell-types.

Regulation of gene expression is fundamental to life. This dissertation uses identified

regulatory DNA to better understand regulatory systems. In the context of either evolution-

to phenotype will be central to completely understanding human biology.