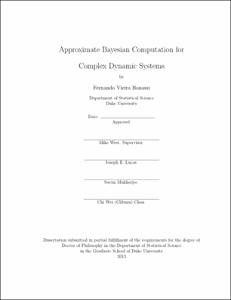 This thesis focuses on the development of ABC methods for statistical modeling in complex dynamic systems. Motivated by real applications in biology, I propose computational strategies for Bayesian inference in contexts where standard Monte Carlo methods cannot be directly applied due to the high complexity of the dynamic model and/or data limitations.

Chapter 2 focuses on stochastic bionetwork models applied to data generated from the marginal distribution of a few network nodes at snapshots in time. I present a Bayesian computational strategy, coupled with an approach to summarizing and numerically characterizing biological phenotypes that are represented in terms of the resulting sample distributions of cellular markers. ABC and mixture modeling are used to define the approach to linking mechanistic mathematical models of network dynamics to snapshot data, using a toggle switch example integrating simulated and real data as context.

Chapter 3 focuses on the application of the methodology presented in Chapter 2 to the Myc/Rb/E2F network. This network involves a relatively high number of parameters and stochastic equations in the model specification and, thus, is substantially more complex than the toggle switch example. The analysis of the Myc/Rb/E2F network is performed with simulated and real data. I demonstrate that the proposed method can indicate which parameters can be learned about using the marginal data.

In Chapter 4, I present an ABC SMC method that uses data-based adaptive weights. This easily implemented and computationally trivial extension of ABC SMC can substantially improve acceptance rates. This is demonstrated through a series of examples with simulated and real data, including the toggle switch example. Theoretical justification is also provided to explain why this method is expected to improve the effectiveness of ABC SMC.

In Chapter 5, I present an integrated Bayesian computational strategy for fitting complex dynamic models to sparse time-series data. This is applied to experimental data from an immunization response study with Indian Rhesus macaques. The computational strategy consists of two stages: first, MCMC is implemented based on simplified sampling steps, and then, the resulting approximate output is used to generate a proposal distribution for the parameters that results in an efficient ABC procedure. The incorporation of ABC as a correction tool improves the model fit, as is demonstrated through predictive posterior analysis on the data sets of the study.