The Relationship of Trabecular Meshwork Stiffness and Outflow Function 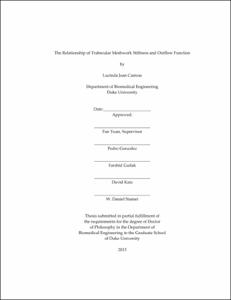 The trabecular meshwork (TM) is comparable to a bioactive filter that plays a major role in regulating outflow of aqueous humor of the eye and setting intraocular pressure (IOP). TM dysfunction may lead to ocular hypertension which is the major risk factor in glaucoma. Although the outflow properties of the TM have been assessed over the last sixty years, very little work has been done assessing its mechanical properties. Therefore, the major goals of these studies were two-fold: (1) to determine the relationship between mechanical properties of TM, specifically the bulk Young's modulus, and outflow function in normal and glaucomatous eyes, and (2) to establish a method and possible animal model for future testing of this relationship.

Outflow function was assessed by constant pressure perfusion in enucleated eyes at four pressure levels (10, 20, 30, and 40 mmHg) to determine outflow facilities and variability in outflow resistance with pressure elevation. A micro-strain analyzer (MSA) was used to determine the circumferential bulk Young's modulus of the TM post-perfusion. Based on their relative ease of availability, pigs and rats were explored as possible animal models. Due to the small size of rat eyes, atomic force microscopy (AFM) was used to assess the Young's modulus of TM rather than with a MSA.

We found that there was a relationship with better outflow function and a stiffer TM in normal eyes. Additionally, glaucomatous TM was found to be much softer and more variable than normal TM. Unfortunately, porcine TM did not serve as a good model for the bulk Young's modulus of human TM, presumably due to anatomical difference in its outflow pathway. Lastly, we were able to establish a new method for measuring the Young's modulus of rat TM for future work to determine potential mechanism for evaluating stiffness changes that may be associated with glaucoma.