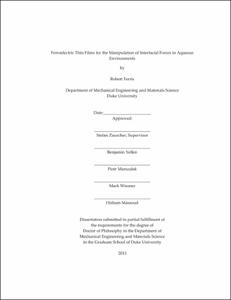 I demonstrate the use of ferroelectric US-PZT thin films to manipulate EDL interaction forces in aqueous environments. My work conclusively shows that the polarization state of US-PZT controls EDL formation and can be used to induce the guided deposition of charged colloidal particles in solution.

I present a robust fabrication scheme for making ferroelectric US-PZT thin films from a sol-gel precursor. By optimizing critical thermal processing steps I am able to minimize the in-plane stress of the film and reliably produce US-PZT thin films on the wafer-scale with mean surface roughness values of only 2.4 nm over a 25 &#956;m2 area. I then establish US-PZT film stability in water by measuring changes in film topography, crystallinity, surface chemistry, and electrical properties as a function of exposure duration. My results show that fabrication of crack-free US-PZT thin film is critical for long-term film fidelity in aqueous environments. Furthermore, I found no change in film topography or bulk composition with increasing exposure duration. Prolonged exposure to aqueous environments, however, gradually oxidizes the surface of the US-PZT wich results in a decrease in film resistivity and polarization saturation. Next, I used colloidal probe force microscopy (CPFM) to measure the EDL interaction force as a function of separation distance between polarized US-PZT thin films and a clean borosilicate probe. CPFM measurements were performed on oppositely polarized US-PZT thin films, which expressed either a positive or negative surface charge, and over a range of ionic strengths. The inner-Helmholtz plane (IHP) potential of the US-PZT was determined by fitting the CPFM force-separation data to number of EDL models, including; an analytical EDL model using a constant potential boundary condition with a Stern layer, a charge regulation EDL model, and a numerical EDL model using the non-linear Poisson-Boltzmann equation. Each model provides good agreement with the experimentally measured and predict high IHP surface potential for the polarized US-PZT thin films in solution. Finally, I demonstrate the use of polarized US-PZT to induce the guided deposition of positively or negatively charged colloidal particles from aqueous environments. I explore the effects of ionic strength, particle size, surface roughness, and pH on particle deposition.