Identification of Mutations That Cause a Phenotypically and Genetically Heterogeneous Disorder, Muscular Dystrophy 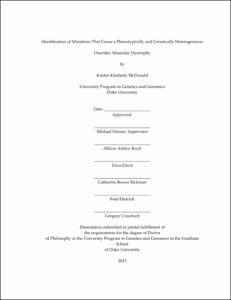 Muscular dystrophy is a devastating disease for which no cures or preventative treatments are currently available. There has been great progress in the identification of genetic mutations that cause some forms of muscle disease; however, genetic heterogeneity is the rule rather than the exception. Molecular diagnosis of these disorders is challenging because the large number of known causative genes makes exhaustive clinical testing very expensive and the similarity of clinical presentation makes selection of likely candidate genes difficult. The Duke Limb-Girdle Muscular Dystrophy (LGMD) group strives to identify the mutations causing disease in affected members of families with molecularly undiagnosed, dominantly inherited forms of muscular dystrophy while potentially identifying and characterizing genes and mutations that have not been previously shown to be involved in muscle disease pathogenesis.

One strategy to identify disease-causing mutations in families with many affected individuals is to perform linkage analysis to identify a region of the genome that is likely to contain the disease-causing variant followed by candidate gene sequencing within the peak to isolate the mutation. Linkage analysis was performed for a family with a molecularly undiagnosed form of scapuloperoneal muscular dystrophy. Three suggestive linkage regions were identified on chromosomes 3, 4, and 14 respectively. Each affected individual in the family carried a heterozygous deletion of a lysine residue at position 1784 in exon 37 of MYH7, which maps to one of the linked loci. Other groups have also identified this variant in individuals with similar symptoms. The deletion of the lysine residue is likely the causative mutation in this family.

An alternate strategy for mutation identification is exome capture and sequencing. This approach may be used to screen genes that are known to be involved in muscle disease pathogenesis while potentially identifying candidate disease-causing variants in genes that have not previously been shown to be involved in the disease. This strategy was evaluated through the analysis of exome sequencing data obtained from multiple affected family members in two families with different muscle disease symptoms. Variant filtration and Sanger sequencing follow-up were performed to identify those variants located in genes known to be involved in skeletal and/or cardiac muscle disease that fit the expected inheritance patterns in each family and are rarely identified in the general population, and likely functional. The mutation, desmin IVS3+3 A>G, was identified in the first family, and the mutation, filamin C p.W2710X, was identified in the second family. These mutations segregated with affection status in the complete families. They have been identified in other individuals with similar phenotypes and were found to affect the proteins by functional analyses. Therefore, the mutations likely caused disease in affected members of these two families as well.

For families in which initial analysis of exome sequencing data does not reveal a likely disease-causing variant in genes in which mutations are known to cause skeletal muscle disease, it is necessary to determine whether the exome sequencing data provided deep, high-quality coverage at each base in their coding and splicing regions. Coverage variability in genes known to be involved in skeletal and/or cardiac muscle disease was examined for eleven example exomes. After duplicate removal, the mean coverage per exome ranged from 42X to 84X, and 85.7%-92.8% of the expected capture region was covered at ¡Ý10X as calculated with the command GATK ¨CDepthOfCoverage. Depth and quality of coverage were examined in the coding and splicing regions of 102 genes that are known to be involved in skeletal and/or cardiac muscle disease; they were found to vary across different exome captures. Some regions were not well covered in any of the exomes sequenced. The results indicate that while many causative genes are well-covered, gaps exist which may interfere with the identification of some disease-causing mutations. In some cases, these gaps may be filled by increasing overall coverage.

The initial screen indicated that mutations in known disease genes may be frequent in the Duke LGMD families, so the use of a single exome in a family to screen genes that are known to be involved in muscle disease was attempted. Exome sequence analysis was performed for single affected individuals from seven families with multiple affected family members. For each exome, the candidate set was restricted to variants found within the coding and splicing regions of 102 skeletal and/or cardiac muscle disease genes. Strict filters were applied to identify extremely rare, high quality variants located within those genes, and Sanger sequencing follow-up was performed to determine which variants segregated with affection status in the complete family. In five of the seven families, potential disease-causing variants were found in a heterozygous state in all affected individuals. When possible, functional testing of these alleles, preferably in an in vivo model, would be beneficial to assist in determining whether each allele is likely to be pathogenic.

The described work utilized linkage analysis followed by candidate gene sequencing as well as exome capture and sequencing to attempt to isolate the mutations responsible for muscular dystrophy in affected family members. While linkage analysis may continue to be important to identify regions of the genome that are identical by descent in extended families, the use of next generation sequencing technologies to isolate mutations that cause rare, highly penetrant disorders in smaller families can be effective. However, it is necessary to examine the depth and quality of coverage within the consensus coding and splicing regions of genes in which mutations are known to cause a similar phenotype to that found in a family of interest. In the future, functional follow-up will be important to assist in the interpretation of variants of unknown significance.