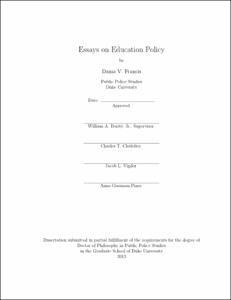 This dissertation consists of three essays on the topic of education policy. In the first essay, I evaluate the impacts of a teacher quality equity law that was enacted in California in the fall of 2006 prohibiting superintendents from transferring a teacher into a school in the bottom three performance deciles of the state's academic performance index if the principal refuses the transfer. The primary mechanism through which the policy should affect student outcomes is through the mix of the quality of teachers in the school. Using publicly available statewide administrative education data, and two quasi-experimental methodologies, I assess whether the policy had an effect on the district-wide distribution of teachers with varying levels of experience, education and licensure and on student academic performance. I extend the analysis by examining whether the policy has differential effects on subgroups of schools classified as having high-poverty or high-minority student populations. I find that, as a result of the teacher quality equity law, low-performing schools experienced a relative increase in fully-credentialed teachers and more highly educated teachers, but that did not necessarily translate to an increase in academic performance. I also find evidence that the dimension along which the policy was most effective was in improving teacher pre-service qualifications in schools with high minority student populations.

In the second essay, I estimate racial, ethnic, gender and socioeconomic differences in teacher reports of student absenteeism and tardiness while controlling for administrative records of actual absences. Subjective perceptions that teachers form about students' classroom behaviors matter for student academic outcomes. Given this potential impact, it is important to identify any biases in these perceptions that would disadvantage subgroups of students. I use longitudinal data from the Early Childhood Longitudinal Study, Kindergarten Class of 1998-99 in conjunction with longitudinal, student-level data from the North Carolina Education Data Research Center to employ a variation of a two sample instrumental variables approach in which I instrument for actual eighth grade absences with simulated measures of eight grade absences. I find consistent evidence that teacher reports of the attendance of poor students are negatively biased and that math teacher reports of male attendance are positively biased. There is mixed evidence with regard to student race and ethnicity.

The third essay is a co-authored work in which we employ a quasi-experimental estimation strategy to examine the effects of state-level job losses on fourth- and eighth-grade test scores, using federal Mass Layoff Statistics and 1996-2009 National Assessment of Educational Progress data. Results indicate that job losses decrease scores. Effects are larger for eighth than fourth graders and for math than reading assessments, and are robust to specification checks. Job losses to 1 percent of a state's working-age population lead to a .076 standard deviation decrease in the state's eighth-grade math scores. This result is an order of magnitude larger than those found in previous studies that have compared students whose parents lose employment to otherwise similar students, suggesting that downturns affect all students, not just students who experience parental job loss. Our findings have important implications for accountability schemes: we calculate that a state experiencing one-year job losses to 2 percent of its workers (a magnitude observed in seven states) likely sees a 16 percent increase in the share of its schools failing to make Adequate Yearly Progress under No Child Left Behind.