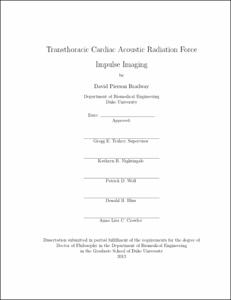 This dissertation investigates the feasibility of a real-time transthoracic Acoustic Radiation Force Impulse (ARFI) imaging system to measure myocardial function non-invasively in clinical setting. Heart failure is an important cardiovascular disease and contributes to the leading cause of death for developed countries. Patients exhibiting heart failure with a low left ventricular ejection fraction (LVEF) can often be identified by clinicians, but patients with preserved LVEF might be undetected if they do not exhibit other signs and symptoms of heart failure. These cases motivate development of transthoracic ARFI imaging to aid the early diagnosis of the structural and functional heart abnormalities leading to heart failure.

M-Mode ARFI imaging utilizes ultrasonic radiation force to displace tissue several micrometers in the direction of wave propagation. Conventional ultrasound tracks the response of the tissue to the force. This measurement is repeated rapidly at a location through the cardiac cycle, measuring timing and relative changes in myocardial stiffness. ARFI imaging was previously shown capable of measuring myocardial properties and function via invasive open-chest and intracardiac approaches.

Preliminary data are presented from <italic>in vivo</italic> trials studying changes in myocardial stiffness occurring under normal and abnormal heart function. Presented is the first use of transthoracic ARFI imaging in a serial study of heart failure in a <italic>porcine</italic> model. Results demonstrate the ability of transthoracic ARFI to image cyclically-varying stiffness changes in healthy and infarcted myocardium under good B-mode imaging conditions at depths in the range of 3-5 cm. Challenging imaging scenarios such as deep regions of interest, vigorous lateral motion and stable, reverberant clutter are analyzed and discussed.

Results are then presented from the first study of clinical feasibility of transthoracic cardiac ARFI imaging. At the Duke University Medical Center, healthy volunteers and patients having magnetic resonance imaging-confirmed apical infarcts were enrolled for the study. The number of patients who met the inclusion criteria in this preliminary clinical trial was low, but results showed that the limitations seen in animal studies were not overcome by allowing transmit power levels to exceed the FDA mechanical index (MI) limit. The results suggested the primary source of image degradation was clutter rather than lack of radiation force. Additionally, the transthoracic method applied in its present form was not shown capable of tracking propagating ARFI-induced shear waves in the myocardium.

Under current instrumentation and processing methods, results of these studies support feasibility for transthoracic ARFI in high-quality B-Mode imaging conditions. Transthoracic ARFI was not shown sensitive to infarct or to tracking heart failure in the presence of clutter and signal decorrelation. This work does provide evidence that transthoracic ARFI imaging is a safe non-invasive tool, but clinical efficacy as a diagnostic tool will need to be addressed by further development to overcome current challenges and increase robustness to sources of image degradation.