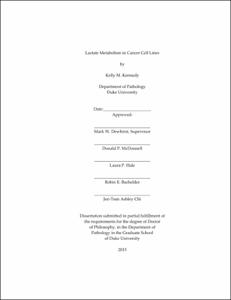 Pathophysiologic lactate accumulation is characteristic of solid tumors and has been associated with metastases and poor overall survival in cancer patients. In recent years, there has been a resurgence of interest in tumor lactate metabolism. In the past, our group has shown that lactate can be used as a fuel in some cancer cell lines; however, survival responses to exogenous lactate alone are not well-described. We hypothesized that lactate utilization and cellular responses to exogenous lactate were varied and dynamic, dependent upon factors such as lactate concentration, duration of lactate exposure, and of expression of the lactate transporter, monocarboxylate transporter 1 (MCT1). We hypothesized that pharmacological inhibition of MCT1 with a small molecule, competitive MCT1 inhibitor, &#945;-cyano-4-hydroxycinnamic acid (CHC), could elicit cancer cell death in high lactate conditions typical of that seen in breast cancer.

My work focused on defining: 1. Lactate levels in locally advanced breast cancer (LABC); 2. Lactate uptake and catabolism in a variety of cancer cell lines; 3. The effect of exogenous lactate on cancer cell survival; 4. Whether the lactate-transporters, MCT1 and MCT4 can be used as markers of cycling hypoxia.

Lactate levels in LABC biopsies were assessed ex vivo by bioluminescence. NMR techniques were employed extensively to determine metabolites generated from 13C-labeled lactate. Cell viability in response to extracellular lactate ( ± glucose and ± CHC) was measured with Annexin V / 7-AAD staining to assess acute survival responses and clonogenic assays to evaluate long-term colony forming ability after lactate treatment. MCT1 and MCT4 protein expression was evaluated in cancer cell lines with Western blots after exposure to chronic or cycling hypoxia. Immunofluorescence was employed to assess MCT1 and MCT4 expression in head and neck cancer biopsies, and the expression patterns of the transporters were correlated to areas of hypoxia, as indicated by hypoxia marker EF5.

Lactate concentrations in LABC biopsied ranged from 0 - 12.3 µmol/g of tissue. The LABC dataset was too small to derive statistical power to test if lactate accumulation in LABC biopsies was associated with poor patient outcome or other clinical parameters of known prognostic significance. All cell lines tested (normal and cancer) showed uptake and metabolism of labeled lactate, with dominant generation of alanine and glutamate; however, relative rates and the diversity of metabolites generated was different among cell lines. MCF7 cells showed greater overall lactate uptake (mean = 18mM) over five days than MDA-MB-231 cells (mean = 5.5mM). CHC treatment effectively prevented lactate uptake in cancer cells when lactate concentrations were &#8804;20mM.

Cell survival was dependent upon lactate concentration and glucose availability. Acute responses to exogenous lactate did not reflect the long-term consequences of lactate exposure. Acutely, HMEC and R3230Ac cells were tolerant of all lactate concentrations tested (0-40mM) regardless of presence or absence of glucose. MCF7 and MDA-MB-231 cells were tolerant of lactate within the concentration ranges seen in biopsies. Cytotoxicity was seen after 24 hr incubation with 40mM lactate (-glucose), but this concentration is three times higher than any measurement made in human biopsies of LABC. Similarly, HMEC and MCF7 cells showed significantly decreased colony formation in response to 40mM exogenous lactate (+ glucose) while R3230Ac and MDA-MB-231 cells showed no impairment in colony-forming abilities with any lactate concentration (+ glucose). 5mM CHC significantly increased cell death responses independent of lactate treatment, indicating off-target effects at high concentrations.

MCT1 was found to be expressed in a majority of the cell lines tested, except for MDA-MB-231 cells. Cancer cells exposed to exogenous lactate showed upregulation of MCT1 but not MCT4. Chronic hypoxia resulted in an increase in protein expression of MCT4 but a decrease in MCT1 expression in cancer cell lines. The time course of regulation of protein levels of each transporter suggested the possibility of expression of both transporters during cycling hypoxia. When cancer cells were exposed to cycling hypoxia, both transporters showed upregulation. In head and neck tumor biopsies, MCT1 expression was significantly positively correlated to aerobic tumor regions and inversely correlated to hypoxic tumor regions.

Cancer cell responses to exogenous lactate were not uniform. Some cell lines demonstrated a lactate-tolerant and/or a lactate-consuming phenotype while other cell lines demonstrated lactate-intolerant and/or non-lactate-consuming phenotype. My work indicates that exogenous lactate was well-tolerated at clinically relevant concentrations , especially in the presence of glucose. Evidence of glutamate metabolism from lactate indicated that exogenous lactate partially progresses through the TCA cycle, suggesting that lactate may be utilized for fuel. The cell death elicited from 5mM CHC treatment was not dependent upon presence of lactate, indicating that manipulation of lactate metabolism may not be the best option for targeting cancer metabolism. When attempting to manipulate lactate metabolism in tumors, microenvironmental factors, such as hypoxia and glucose, must be taken into account in order to ensure a predictable and favorable outcome. Together, these results illustrate the importance of characterizing tumor metabolism before therapeutic intervention.