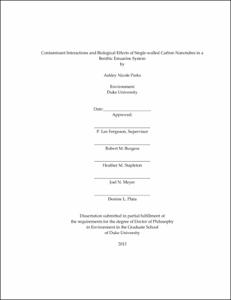 Single-walled carbon nanotubes (SWNT) are highly ordered filamentous nanocarbon structures. As their commercial and industrial use becomes more widespread, it is anticipated that SWNT will enter the environment through waste streams and product degradation. Because of their highly hydrophobic nature, SWNT aggregate and settle out of aqueous environments, especially in saline environments such as estuaries. Therefore, sediments are a likely environmental sink for SWNT once released. It is important to understand how these materials will impact benthic estuarine systems since they are the probable target area for SWNT exposure in addition to containing many lower trophic level organisms whose survvial and contaminant body burdens can have a large impact on the overall ecosystem. Disruptions in lower trophic level organism survival can have negative consequences for higher trophic levels, impacting the overall health of the ecosystem. It is also important to consider contaminant bioaccumulation, trophic transfer and biomagnification. If SWNT are taken up by benthic invertebrates, there is the possibility for trophic transfer, increasing the exposure of SWNT to higher trophic level organisms that otherwise would not have been exposed. If this type of transfer occurs in environmentally important species, the potential for human exposure may increase. My research aims to determine the magnitude of the toxicity and bioaccumulation of SWNT in benthic estuarine systems, as well as determine how they interact with other contaminants in the environment. This research will contribute to the knowledge base necessary for performing environmental risk assessments by providing information on the effects of SWNT to benthic estuarine systems.

Before investigating the environmental effects of SWNT, it is imperative that a measurement method is established to detect and quantify SWNT once they enter the environment. This research utilized pristine, semiconducting SWNT to develop extraction and measurement methods to detect and quantify these specific materials in environmental media using near infrared fluorescence (NIRF) spectroscopy. Semiconducting SWNT fluoresce in the near infrared (NIR) spectrum when excited with visible&ndashNIR light. This unique optical property can be used to selectively measure SWNT in complex media.

The fate, bioavailability, bioaccumulation and toxicity of SWNT have not been extensively studied to date. Pristine SWNT are highly hydrophobic and have been shown to strongly associate with natural particulate matter in aquatic environments. In light of this, I have focused my research to examine the influence of sediment and food exposure routes on bioavailability, bioaccumulation, and toxicity of structurally diverse SWNT in several ecologically-important marine invertebrate species. No significant mortality was observed in any organism at concentrations up to 1000 mg/kg. Evidence of biouptake after ingestion was observed for pristine semiconducting SWNT using NIRF spectroscopy and for oxidized <super>14</super>C&ndashSWNT using liquid scintillation counting. After a 24 hour depuration period, the pristine semiconducting SWNT were eliminated from organisms to below the method detection limit (5 &mug/mL), and the <super>14</super>C&ndashSWNT body burden was decreased by an order of magnitude to a bioaccumulation factor (BAF) of <0.01. Neither pristine SWNT nor oxidized <super>14</super>C&ndashSWNT caused environmentally relevant toxicity or bioaccumulation in benthic invertebrates. Overall, the SWNT were not bioavailable and appear to associate with the sediment.

In addition to investigating the toxicity and bioaccumulation of SWNT as an independent toxicant, it is important to consider how they will interact with other contaminants in the environment (i.e., increase or decrease toxicity and bioaccumulation of co&ndashcontaminants, alter the environmental transport of co&ndashcontaminants, induce degradation of co&ndashcontaminants, etc.). I wanted to investigate the effects of SWNT on a complex mixture of contaminants already present in a natural system. New Bedford Harbor (NBH) sediment, which is contaminated with polychlorinated biphenyls (PCBs), was amended with pristine SWNT to determine if the presence of SWNT would mitigate the toxicity and bioaccumulation of the PCBs in deposit-feeding invertebrates. A dilution series of the NBH sediment was created using uncontaminated Long Island Sound (LIS) sediment to test 25% NBH sediment, 50% NBH sediment, 75% NBH sediment, and 100% NBH sediment. The results of this work showed increased organism survival and decreased bioaccumulation of PCBs in treatments amended with SWNT, with the greatest reduction observed in the 25% NBH sediment treatment group amended with 10 mg SWNT/g dry sediment. Polyethylene (PE) passive samplers indicated a reduction of interstitial water (ITW) PCB concentration of greater than 90% in the 25% NBH sediment + 10 mg SWNT/g dry sediment amendment. The ITW concentration was reduced because PCBs were not desorbing from the SWNT. Lower bioavailability leads to reduced potential for toxic effects, supporting the observation of increased survival and decreased bioaccumulation. Once in the sediment, not only are SWNT not bioavailable, they act as a highly sorptive phase, such as black carbon (BC), into which hydrophobic organic contaminants (HOCs), such as PCBS and polycyclic aromatic hydrocarbons (PAHs), can partition, thereby reducing the toxicity and bioavailability of co-occurring HOCs.

To more fully understand the impact of SWNT in this environment, their biodegradability also needs to be investigated. Biodegradation of SWNT could lead to release and/or transformation of sorbed HOCs as well as a change in the inherent transport, toxicity, and bioaccumulation of SWNT in the estuarine environment. Because the persistence of SWNT will be a primary determinant of the fate of these materials in the environment, I conducted experiments to determine if the fungus <italic>Trametes versicolor</italic>, the natural bacterial communities present in NBH sediment, and municipal wastewater treatment plant sludge could degrade or mineralize oxidized <super>14</super>C&ndashSWNT. Over a six month time period, no significant degradation or mineralization was observed. In all treatments, approximately 99% of the 14C-SWNT remained associated with the solid phase, with only approximately 0.8% of added <super>14</super>C present as dissolved species and only 0.1% present as <super>14</super>CO2. These small pools of non-SWNT <super>14</super>C were likely due to trace impurities, as no differences in production were observed between treatments and abiotic (killed) controls.