Genetic Analysis of the Interplay between the Anchor Cell and its Microenvironment during Invasion through Basement Membrane in C. elegans 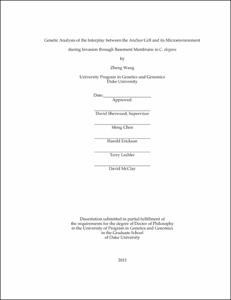 Basement membrane (BM) is a dense, conserved sheet-like extracellular matrix that provides structural support, compartmentalizes tissues, and regulates cell behaviors. Despite the barrier-like properties of BM, cell invasion through BM takes place normally in many developmental and physiological processes. Deregulation of cell invasion causes a variety of human diseases, most notably, cancer metastasis. A better understanding of cell invasion would help in the design more effective therapeutic strategies for those diseases.

Cell invasion through BM is a dynamic process comprising multiple intertwined steps, including acquirement of polarized cellular morphology, BM breaching, and BM remodeling. Despite much effort on investigating cellular invasive programs used for BM penetration, little is know about how cells detect invasive cues that polarize the invasive responses. Although the establishment of invasive polarity is critical as it initiates subsequent invasive behavior, the invasion process would not be completed without effective BM remodeling. Given that BM remodeling is often an integral part of tissue morphogenesis, the underlying interactions among cells and surrounding tissues make it challenging to understand the individual contributions of cells to changes in BM structure.

To gain insight into these two questions requires simple, experimental in vivo models. Anchor cell (AC) invasion into the vulval epithelium in C. elegans provides a visually accessible and experimentally tractable invasion model that is particularly suitable for cell biological and genetic analysis of the complicated interplay among local BM, an invading cell and the surrounding tissues. Using this model, I have investigated (1) how the AC detects dynamically expressed and localized netrin, a polarizing invasive cue for the AC; (2) what the functional contribution of the AC (as an invading cell) is to BM remodeling during uterine-vulval attachment, a post-embryonic organogenesis process.

First, I found that localized netrin polarizes the cellular invasive response towards the BM by stabilizing and spatially orienting a novel receptor-induced polarity oscillation. This oscillation is characterized by periodic F-actin assembly and disassembly at random sites of the plasma membrane of the AC. I have found F-actin assembly is accompanied by the formation of cellular protrusions. Strikingly, when these protrusions contact localized netrin, they are stabilized. Thus, I propose a mechanistic model where the ligand-independent activity of the receptor generates exploratory behavior. This mechanism orients the invasive polarity of the AC towards its BM target where netrin is normally localized. Second, taking advantage of an unbiased mutagenesis screen, I characterized a mutant with defects in BM sliding, a newly uncovered BM remodeling mechanism. I found that the invading AC utilizes a conserved transcription factor to control the initiation of BM sliding, which involves the regulation of integrin-mediated cell-matrix adhesion. Thus, my study revealed a novel functional role for the AC in BM remodeling during tissue restructuring.